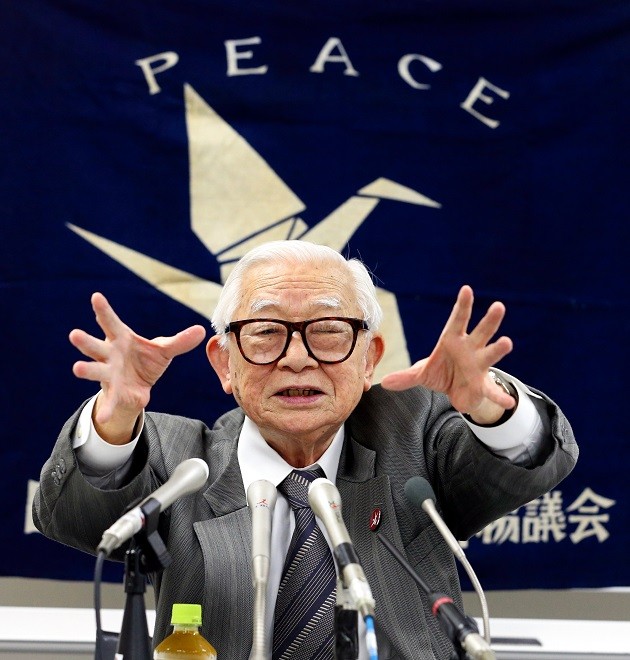 Mikiso Iwasa speaks at a news conference as a representative committee member of the Japan Confederation of A- and H-Bomb Sufferers Organizations (Nihon Hidankyo) in Tokyo in October 2015. (Asahi Shimbun file photo)

Mikiso Iwasa, a survivor of the atomic bombing of Hiroshima and a giant in the hibakusha movement to rid the world of nuclear weapons, died at his home in Funabashi, Chiba Prefecture, of pancreatic cancer on Sept. 7. He was 91.

Iwasa served as an adviser to the Japan Confederation of A- and H-Bomb Sufferers Organizations (Nihon Hidankyo) and was professor emeritus of Kanazawa University.

Born in Fukuoka Prefecture, Iwasa was only 1.2 kilometers from Ground Zero when the world's first atomic bomb detonated over Hiroshima on Aug. 6, 1945.

The attack initially claimed tens of thousands of lives, including those of his mother and younger sister, and countless others over ensuing decades.

Iwasa, 16 years old at the time, was in the yard of his home in what is now the city’s Naka Ward.

He became dean of Kanazawa University’s law faculty and later an assistant director general at Nihon Hidankyo in 2000.

Iwasa was selected as a representative committee member of and adviser to Nihon Hidankyo in 2011 and 2017, respectively, during which he promoted efforts on the part of hibakusha.

In 2016, Iwasa was present when U.S. President Barack Obama made a historic visit to Hiroshima on the anniversary of the atomic bombing and paid a moving tribute to the victims.

Sunao Tsuboi, 95, chairman of Hiroshima-ken Genbaku Higaisha Dantai Kyogikai (Hiroshima Prefecture’s council of atomic bomb victims organizations), who also attended the occasion and worked with Iwasa as a representative member of Nihon Hidankyo over the six years through June 2017, released a statement to commemorate his life.

“He (Iwasa) led the activity of Nihon Hidankyo,” Tsuboi said. “I express my sincere gratitude, respect and condolences for his devotion.”

Iwasa in his later years made great efforts to pass down stories connected to the atomic bombing to younger generations.

He helped establish a nonprofit group called the No More Hibakusha Project--Inheriting Memories of the A- and H-Bomb Sufferers in 2011. As a co-founder, he worked tirelessly to turn nuclear attack-linked data and materials into digitized archives.

In reference to Iwasa, who served as representative director of the group, Yoshie Kurihara, 73, an official of the organization’s secretariat in Tokyo, said he never stopped asking “what did atomic bomb victims had to die for.”

“He would say the state’s responsibility should be fulfilled by its declaring it will never engage in nuclear warfare,” said Kurihara.

Tamiko Nishimoto, 79, chairwoman of the Ishikawa Prefecture’s hibakusha association, mourned Iwasa's death, calling him “a great individual who built a foundation” for the anti-nuclear campaign.

Nishimoto said she was actively involved in peace activities following Iwasa’s lead from the 1970s.

According to Nishimoto, Iwasa was haunted by his inability to rescue his mother who died of her burns and the fact he owned no reminders of his younger sister. Because of this, she said Iwasa waged an aggressive stance on the issue of abolishing nuclear weapons even though he had a gentle disposition.

“He (Iwasa) would ask how it is forgivable for people to do such a terrible thing to other people,” she said. “His life's goal was to abolish nuclear weapons.”

More than 30 years ago, a sixth-grader at an elementary school drew a picture after hearing a story from Iwasa. A “kamishibai” picture card theater based on the picture was completed this past summer.

“When I told him (Iwasa) to check the completed kamishibai, he said he was looking forward to it. But he died before it was shown to him,” Nishimoto said. “Even so, the seeds he scattered have grown steadily to bear flowers.”