Crown Prince Fumihito and Crown Princess Kiko, who turned 54 on Sept. 11, read books about Okinawa and stroll in the grounds of the Akasaka Estate in Tokyo on Aug. 14. (Provided by the Imperial Household Agency) 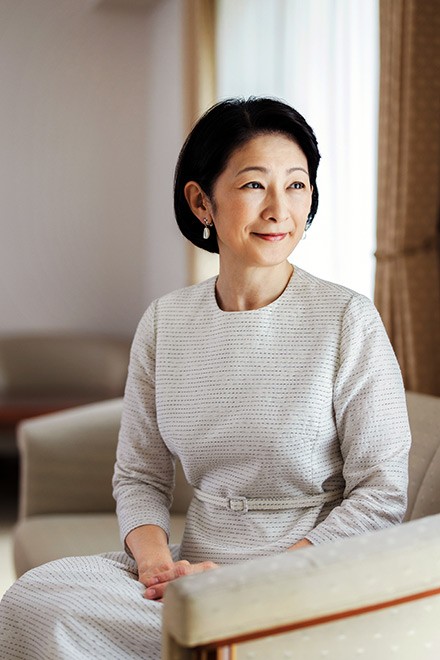 Crown Princess Kiko on Aug. 14 at her family’s residence. She turned 54 on Sept. 11. (Provided by the Imperial Household Agency)

Crown Princess Kiko marked her 54th birthday on Sept. 11 with a statement expressing her intention to respect the feelings of her eldest daughter Princess Mako concerning her long-postponed wedding plans.

“As a parent, I think it is important to listen to what my (eldest) daughter is feeling about the issue and to have numerous and candid conversations with her about it,” Kiko said in the statement released only in Japanese in response to questions submitted by the Imperial Household Agency Press Club. “I wish to respect her feelings as much as possible.”

In February 2018, the Imperial Household Agency announced that the formal engagement and marriage of Princess Mako, 28, to Kei Komuro will be postponed until 2020 after financial issues involving Komuro’s family came to light.

Since then, neither the couple, university classmates, nor the agency, have made any official announcements about their future plans.

Kiko also mentioned her son, Prince Hisahito, and the family's plans to sit down together to discuss which high school he should attend.

Hisahito, 14, second in line to the throne, is a second-year student at Ochanomizu University Junior High School in Tokyo. He is the youngest child and only son of Kiko and Crown Prince Fumihito.

Kiko also revealed that she has frequently gone online to perform her official duties due to the COVID-19 pandemic. She also disclosed that she attended an online seminar held by the International Union against Tuberculosis and Lung Disease, of which she is an honorary member.

Kiko said in her statement that her goal is to keep thinking about “how to have a rich communication depending on the situation.”

Since May 2019, Fumihito and Kiko have taken over some of the duties that were formerly carried out by Emperor Naruhito and Empress Masako.