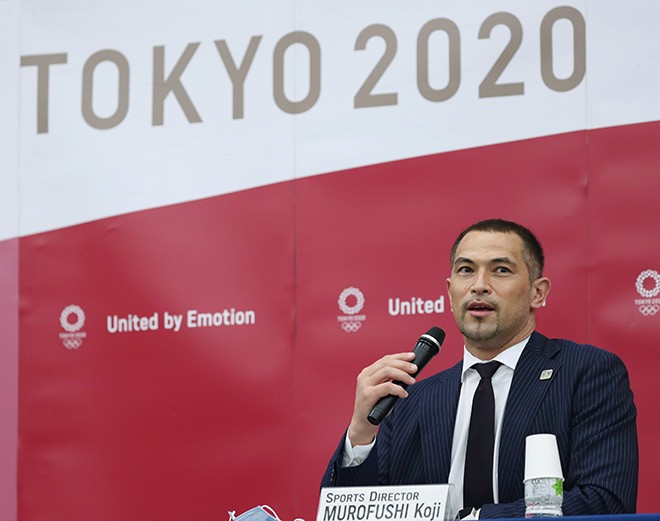 Koji Murofushi, the former sports director of the 2020 Tokyo Olympic and Paralympic organizing committee, answers questions from reporters about the Games’ schedule and venues on July 17, 2020. (Pool)

Koji Murofushi, the 2004 Athens Games gold medalist in the hammer throw, was named the next commissioner of the government’s Japan Sports Agency on Sept. 11.

The Cabinet chose Murofushi, 45, who serves as the sports director of the 2020 Tokyo Olympic and Paralympic organizing committee, to replace Daichi Suzuki, whose five-year term expires at the end of September.

He became the first Japanese athlete to win gold in a field throwing event in the 2004 Athens Games. He also won a bronze medal in the 2012 London Games before retiring from competition in 2016.

Murofushi also serves as a board member of the Japanese Olympic Committee.

Suzuki, 53, a swimming gold medalist in the 1988 Seoul Olympics, served as president of the Japan Swimming Federation and assumed other posts before becoming the JSA's first commissioner when it was established in 2015.

He compiled the so-called “Suzuki plan” to strengthen development of athletes with an eye on the Tokyo Games and allocated a bigger budget to sports in which Japanese athletes are more likely to win medals.

Following a series of scandals in the sports world, Suzuki worked hard to draw up the governance code that serves as the new guideline for the management of sports organizations.