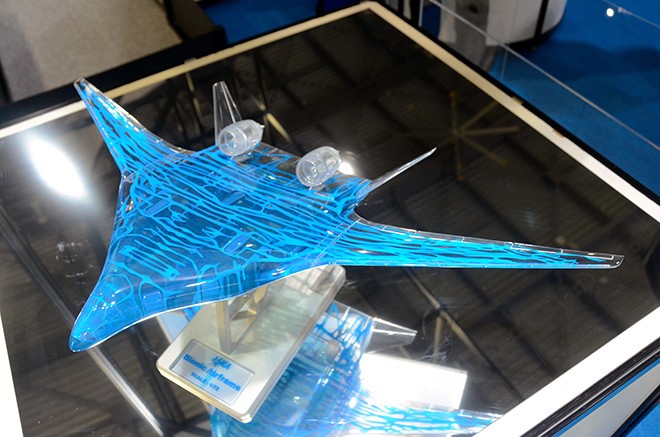 A 1:72 scale model of a flying wing aircraft that imitates the structure of sunfish. Photo was taken in Tokoname, Aichi Prefecture, on Sept. 10. (Sho Hatsumi)

TOKONAME, Aichi Prefecture--Sunfish, an odd-looking creature that roams the ocean, are the inspiration behind the design of next-generation aircraft that could transform commercial aviation.

The aircraft, still in the research stage, is being developed jointly by the Japan Aerospace Exploration Agency (JAXA) and Tokyo-based Chuo Engineering Co.

The aircraft will weigh less and be more streamlined than conventional aircraft to reduce air resistance. There are hopes the technology will improve fuel efficiency and even lead to an electric version.

While aircraft today typically comprise a tubular fuselage attached with wings, the research team is focusing on a “flying wing,” which features a flat body that integrates the fuselage and the wing structure.

“Conventional aircraft are nearing their performance limit as experts around the world are studying their design thoroughly,” said Hikaru Hoshi, a JAXA associate senior researcher of aeronautical technology.

Hoshi, 44, said the tailless design could improve fuel efficiency by 50 percent or so due to reduced air resistance.

But there is a drawback: Making the flying wing aircraft strong enough means increasing the weight.

Researchers cast their sights on the natural world to seek inspiration from the body structures of living creatures. This type of research method, known as biomimetics, has been used in many fields.

Researchers initially studied birds and bats, but soon realized their skeletal structures are too simple to be applied to aircraft design.

They next looked at marine life. Manta rays appeared promising, but it turned out that their flexible framework that enables the fish to flutter their bodies is unsuited.

Researchers eventually arrived at sunfish. The first step was to dissect sunfish and apply their skeletal structure to airframe design.

The research team also singled out elements of their body structure that are essential for flight through analysis technology called “topology optimization,” a forte of Chuo Engineering, to design an aircraft that is both lightweight and strong, Hoshi said.

Chuo Engineering displayed a model built to 1:72 scale at Manufacturing World Nagoya, an exhibition that ran through Sept. 11 at the Aichi Sky Expo hall in Tokoname, Aichi Prefecture.

The actual aircraft would be 27 meters long with a wingspan of 55 meters.

Initial flight tests using a scale model are expected several years from now. Plans are for the next-generation aircraft to be operational in the 2050s.

“Living creatures have taken eons to achieve their optimal shapes,” said Tomohiro Yamakami of Chuo Engineering, who is part of the research team. “My dream is that aircraft of this type will be flying around the world 50 years from now.”

Yamakami, 38, said the envisaged aircraft should not only improve fuel efficiency but also increase flight speed and reduce noise levels.

The scale model exhibited at Manufacturing World Nagoya has two jet engines mounted at the rear part of the upper fuselage.

Researchers are also weighing the option of replacing them with electric engines when the aircraft becomes available for practical use.

But with current technology, they are expected to have short flight ranges. Less air resistance would help prolong flight ranges, which could make electric aircraft a practical feasibility.

The aircraft industry is facing hard times around the world due to a lack of demand for air travel as the COVID-19 pandemic rages.

In addition, Mitsubishi Heavy Industries Group has been forced to suspend development of the SpaceJet, previously known as the Mitsubishi Regional Jet, which was expected to become Japan's first domestically produced passenger jet.

Chuo Engineering, with its strength in aircraft design, testing and analysis, is hoping to apply those technologies to a broad range of products other than aircraft.