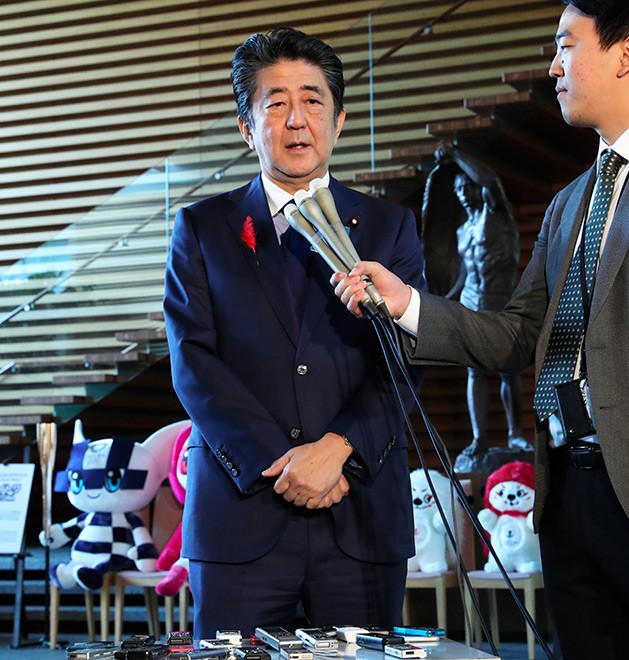 Prime Minister Shinzo Abe talks to reporters at his office on Oct. 1, 2019, as the consumption tax rate is raised from 8 percent to 10 percent. (Takeshi Iwashita)

The outgoing administration of Prime Minister Shinzo Abe will probably go down in history as one that failed to secure a path for a return to fiscal health despite having raised the consumption tax rate on two occasions.

Certainly, it was the previous administration, led by the now-departed Democratic Party of Japan, that had legislation enacted in 2012 for a two-step hike in the consumption tax rate. Whether to put a law into practice, however, owes much to the decision of the administration that is in power at the time.

The tax hikes nearly halved Japan’s annual primary-balance deficit from 26 trillion yen ($244.97 billion) in fiscal 2012 to 14 trillion yen in fiscal 2019. It is true the country’s fiscal state has been improved to a certain extent.

It should not be overlooked, however, that Japan experienced no major economic crisis before the onset of the COVID-19 pandemic and enjoyed the postwar period’s second-longest phase of economic expansion.

One could only say the administration, despite its stability that allowed it to serve the longest time in the postwar period, failed to do sufficient work to restore the country’s fiscal health.

The Abe administration took over the fiscal health goal of achieving a zero primary-balance deficit in fiscal 2020 when it took power from the DPJ-led government late in 2012.

Social security spending is expected to balloon after baby boomers begin to turn 75 in 2022. Japan’s deficit-ridden fiscal state should have been put back on its feet before that happens, but the target year for the goal was postponed in 2018 to fiscal 2025.

It was obvious from the beginning that the goal was not achievable by the two-step tax hikes alone.

The Cabinet Office released simulation results in summer 2013, immediately following Abe’s return to power, saying there would still be more than a 10 trillion yen primary-balance deficit in fiscal 2020, which showed that drastic spending cuts or additional tax hikes would have been inevitable.

The Abe administration, however, twice put off a tax hike, citing concerns about a possible impact on the economy.

In addition, when the administration finally raised the tax rate to 10 percent, it abruptly repurposed part of the increase in revenue from the hike, which would have reduced the deficit, to other uses, including waiving fees for higher education, early childhood education and nursery services.

Both measures were seen as strategic moves for scoring points in national elections. Following the rate hike to 10 percent, the administration put a lid on discussions on further hikes.

In the meantime, the administration came up year after year with fiscal stimulus measures and never worked seriously on cutting expenditures.

“No economic recovery, no return to fiscal health,” Abe has said.

Certainly, tax hikes and spending cuts with no account taken of the state of the economy could trigger an economic slump, causing tax revenues to drop and the fiscal state to worsen on the contrary.

But Abe was espousing an annual economic growth of 3 percent in nominal terms and 2 percent in real terms. He could not escape the charge of irresponsibility for having presented an overoptimistic scenario premised on a fantastic growth rate at a time when depopulation has lowered Japan’s potential growth rate to only 1 percent or less.

Aging of the population does not wait for politicians to make decisions. The later the measures they take, the greater the burden on the generations to come.

An unprecedented 90 trillion yen will be issued in new government bonds this fiscal year to cover the cost of measures to cope with the coronavirus crisis. That means the path to a return to fiscal health will have to be reworked from scratch.

That has left a daunting task for the incoming administration to deal with.