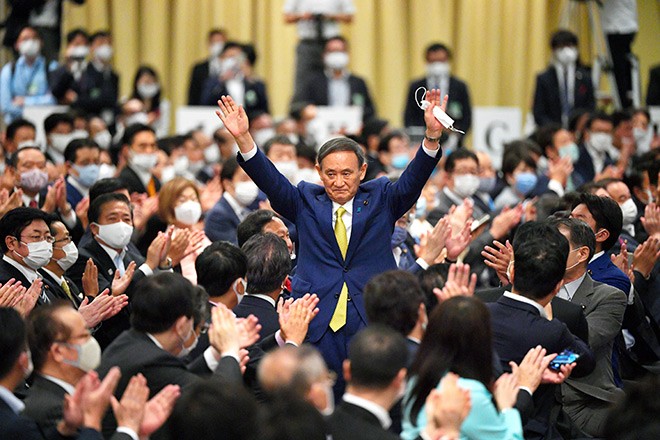 A jubilant Chief Cabinet Secretary Yoshihide Suga after he was elected the new president of the ruling Liberal Democratic Party in Tokyo on Sept. 14 (Kotaro Ebara)

After the outcome was announced, Suga gave a speech in which he expressed his “heart-felt gratitude” to Abe for his contribution to the country during his nearly eight years in office.

He called on other lawmakers to give applause to the outgoing prime minister.

“A political vacuum must not happen when Japan is facing a national crisis such as the new coronavirus pandemic,” Suga said. “I will take over and advance the efforts Prime Minister Abe has made.”

He also pledged to push forward with regulatory reform by breaking top-to-bottom sectionalism, vested interests and a tendency among government ministries and agencies to blindly follow precedents.

Suga, 71, won by a landslide in voting by LDP Diet members and the party’s local chapters.

He will formally be named prime minister in an extraordinary Diet session to be held Sept. 16 due to the party’s overwhelming strength in the Diet.

The LDP presidential poll followed Abe’s abrupt decision in late August to step down due to health reasons. Abe had one more year to serve until his three-year term as LDP president expired.

Other contenders in the election were Fumio Kishida, chief of the LDP’s Policy Research Council, and Shigeru Ishiba, a former defense minister and former secretary-general of the LDP.

In the election, 394 LDP lawmakers, excluding the chairs of both houses in the Diet, and a total of 141 local delegates--three each of the 47 prefectural chapters--cast their ballots.

But the party did not disclose breakdowns of their votes.

According to figures compiled by The Asahi Shimbun, Suga dominated his rivals in terms of votes from the local chapters, winning 89 votes of the 141 votes.

In his speech, Suga also stressed the importance of self-support, mutual support in communities, support from local and central governments and creating strong bonds in society.

Suga assumed the post of the chief Cabinet secretary, the government’s most senior spokesman, when Abe took office in December 2012 for the second time as prime minister.

Since then, he remained a pivotal figure in the Abe administration.

Although he had repeatedly denied any intention in the past to enter the post-Abe presidential race, he announced his candidacy to continue with the policy goals that marked Abe's long tenure in office.

Suga was the front-runner in the race from the start by securing support from the party’s five major factions, excluding the two factions led by Kishida and Ishiba each.

Suga is expected to announce a new lineup of the party leadership within days, including the post of LDP secretary-general and the chiefs of the Policy Research Council and General Council.

He will also hold talks with Komeito, the LDP's junior coalition partner, to secure its willingness to remain in the coalition framework.

After he is elected prime minister, Suga will name members of his Cabinet.