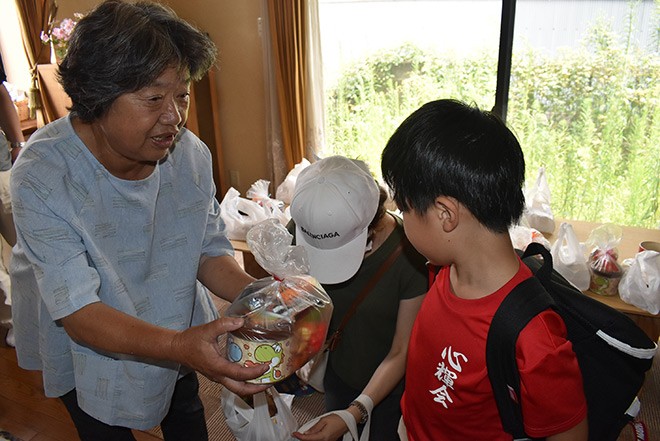 Minna Shokudo Mure no Kai (Association of Mure: cafeteria for all) has temporarily closed its children’s cafeteria in Osaka’s Sumiyoshi Ward due to the COVID-19 pandemic. Instead, it distributes take-out bento boxed meals and snacks to children once a month, but many users want the cafeteria to reopen. (Yoshichika Yamanaka)

Yoko Yuki used to feed hungry children at her cafeteria in Osaka's Minato Ward until the new coronavirus pandemic forced her to close it in March.

“I really want to reopen it, but have no courage to do so,” said Yuki, 58, who operates the children's cafeteria Tanaka Shokudo.

She used to offer meals to children at a nearby public facility on Saturdays at lunchtime once a month and served some 300 people on a busy day.

Yuki planned to resume operations in October, but community infections are still spreading. She said she decided not to reopen until the end of this winter since her staff and parents of users of her cafeteria suggested, “It’s still too early to reopen it, isn’t it?”

Tanaka Shokudo is among many children’s cafeterias that have been forced to temporarily close due to the COVID-19 pandemic and still are unable to reopen.

The cafeterias not only provide meals to children of financially struggling families but also help detect child abuse and neglect cases. If the situation continues, that could result in undermining children’s well-being.

Instead, it now distributes take-out bento boxed meals to children once a month. It prepared about 40 bento on one weekend in early August, and children and their mothers started arriving at the cafeteria in the early afternoon to receive the boxed lunches and snacks.

But Yumiko Asada, 71, representative of the cafeteria, expressed concern about the current situation.

“We can’t spend enough time talking with each other while we are operating this way," she said. "Users may feel less connected to a local community.”

Kaori Iwabashi, 49, whose third-grade son used to eat at the cafeteria, said, “This is a place where children can develop a friendship with other kids outside their schools and interact with local residents. I want the cafeteria to reopen.”

Okinawa Prefecture has the highest ratio of children’s cafeterias in proportion to the number of elementary schools in the country. A survey conducted by the prefectural government in mid-August found 60 percent of 203 such cafeterias in the prefecture closed temporarily, including those that partially suspended operations, such as opening less frequently than before.

According to the Nagoya-based Aichi Kodomo Shokudo Network (Network of children’s cafeterias in Aichi), less than 10 percent of its 82 members are serving meals at their indoor cafeterias.

The Tokyo-based nonprofit organization Musubie, which supports children’s cafeterias around the country, cited four major reasons why such eateries have been unable to reopen.

Private houses and facilities where they provide meals will become the so-called 3Cs--confined, crowded and close-contact settings; staff members are worried about getting infected because they are elderly; operators run out of money due to costly infection prevention measures, including disinfection; and they cannot secure places to offer meals because of restrictions on the use of public facilities.

In June, Musubie surveyed 238 operators of children’s cafeterias in 37 prefectures through major networks of such eateries across the country. It found more than 80 percent of them temporarily closed their cafeterias with nearly half saying they had “yet to decide when to reopen.”

According to Musubie, some operators were forced to postpone their reopenings that were initially scheduled for summer or autumn.

“If the cafeterias continue to remain closed, they cannot sufficiently listen to children’s problems,” said a Musubie staff member. “Children could face a risk of being socially isolated.”

Children’s cafeterias not only provide meals to children in need but also help monitor their well-being and serve as a place to interact with other people.

“Local residents will become unable to watch over children in their community as carefully as they used to,” said Makoto Yuasa, a specially appointed professor of assistive technology at the University of Tokyo, who serves as chief director of Musubie.

Some children’s cafeterias have remained open despite all the difficulties during the pandemic.

One of the operators of such eateries is Oita-based Sumire gakkyu (Sumire class), which runs seven children’s cafeterias in Oita Prefecture.

The operator has continued providing study support and meals to children by taking thorough infection prevention measures, such as checking users’ body temperatures and disinfecting the site.

“As many people refrain from going out, some children have fewer places where they feel safe and more kids are using our cafeterias,” said Tomio Fujii, 73, chief director of Sumire gakkyu. “Now, more than ever, we need to provide places for children since many of them have family problems.”

But infection prevention measures, including disinfection, cost the operator about 50,000 yen ($471) a month. It is facing a tougher financial situation than a normal year as it has also received around 3 million yen less from companies and other donors due to economic fallout from the pandemic.

The operator plans to hold a charity concert in October to raise funds.