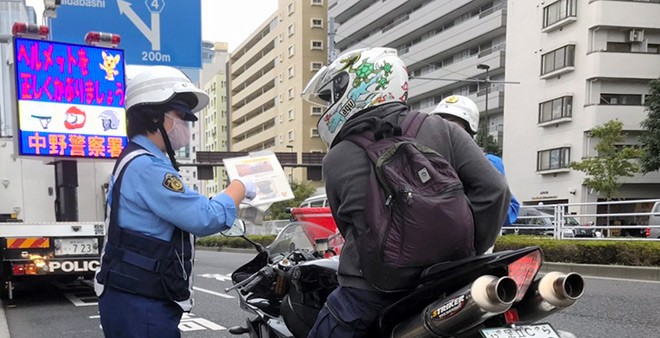 A Nakano Police Station officer tells a motorcycle driver to “please wear these protectors, too,” on Ome-kaido street on Sept. 14 where a fatal accident occurred last month in Tokyo’s Nakano Ward. (Eishi Kado)

Tokyo police said they will start cracking down on problem traffic routes, after the number of motorcycle fatalities in Tokyo so far this year doubled from the same period last year.

There were 26 fatalities in the period from January to August, with half of those occurring in the months of July and August alone.

The Tokyo Metropolitan Police Department said it is stepping up its policing and traffic instruction presence in areas prone to accidents, as of Sept. 14.

Police aim to instill a sense of concern in drivers just ahead of the fall travel season.

“There are many motorcycle accidents in September every year,” a metropolitan police official said. “We will urge drivers to be more cautious through stepping up our presence so that they can safely and securely drive without becoming overconfident in their skills.”

Tokyo police said they are beefing up their traffic measures through Sept. 18. They will be deploying more police motorcycles and cruisers onto streets where accidents frequently occur during commute times. They also said police cars will in some cases drive while flashing their red lights to call for more careful driving.

There were 90 traffic fatalities from accidents in Tokyo between January and August, police said.

Fatalities have dropped in 29 prefectures across Japan, year on year, due to the stay-at-home measures put in place to prevent the coronavirus from spreading.

But the number of traffic fatalities actually increased in Tokyo, up by 17.

The frequency of accidents remained around the same level as the previous year until June. But then it rapidly increased in the months of July and August.

Tokyo police said it is hard to say exactly why the number has increased, but provided a few possible reasons.

One potential cause is that more people are avoiding using trains and instead riding motorcycles because of the COVID-19 pandemic. Another is that after the overall traffic volume dropped because of the pandemic, drivers began to speed up.

Police also suggested that drivers may simply not be driving carefully enough on the roads.

The number of injuries from motorcycle accidents decreased year on year, but it has still reached as high as 2,787.

Of the 26 motorcycle fatalities in Tokyo so far this year, there were seven people each in their 20s and 50s, which were the highest numbers. There were four people in their 40s and four were older than 60, while three were in their 30s. One high school student was killed in a motorcycle accident.