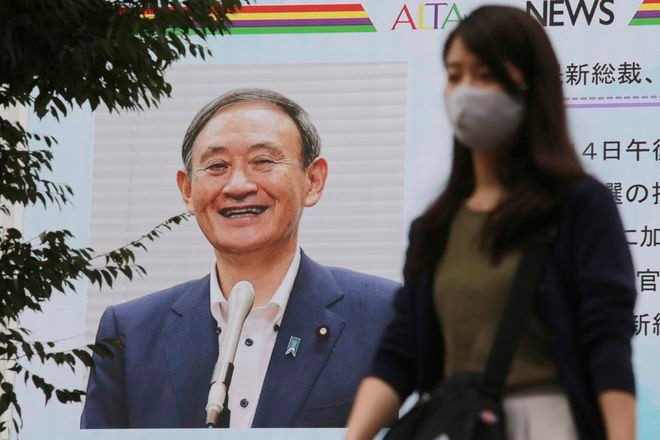 A woman walks by a large screen showing Yoshihide Suga in Tokyo on Sept. 14. (AP Photo)

The victory came only 10 or so days after Suga officially announced his candidacy in the LDP leadership election, which was triggered by Prime Minister Shinzo Abe’s surprise resignation announcement.

Suga’s victory in the LDP poll, however, came without any overall review of Abe’s lengthy administration, which lasted seven years and eight months, or sufficient policy debate on the future of the nation.

Suga won overwhelmingly, garnering more than 70 percent of the votes cast by LDP Diet members as well as over 60 percent of the ballots allocated to the party’s prefectural chapters, which had three each.

While rank-and-file party members and associates were not allowed to cast votes, the local chapters excluding the unit representing Akita Prefecture, where Suga was born, decided on the candidates they voted for through primaries and other means.

The election results clearly indicate broad support for Suga not just among LDP lawmakers but also among local party members, who tend to show more of the general voter trends.

The sudden change of the nation’s leader is taking place amid the new coronavirus pandemic. Suga, who has pledged to carry on the policy agenda of the Abe administration, may have been given a leg up by a general trend to prefer security over change at the moment.

Suga should understand that his landslide victory in the LDP leadership election was not built on a solid political foundation.

Suga has shown no intention to revisit any of the political scandals involving Moritomo Gakuen, the Kake Educational Institution and the prime minister’s annual cherry blossom viewing parties, which seriously damaged the public's trust in politics and bureaucracy.

Suga has insisted that the issues related to these scandals have already been settled.

Speaking after his election as the new LDP chief on Sept. 14, Suga said he will try to build a government trusted by the people. Does he believe that he can achieve this goal while keeping the lid on the problems that were brought to the fore by these scandals?

The pandemic has darkened the once bright employment picture in Japan and jeopardized the prospects of revitalizing local economies by luring more overseas tourists.

There has been no progress on such key diplomatic challenges as negotiating a peace treaty with Russia and settling the issue of North Korea’s past abductions of Japanese citizens.

The Abe administration’s responses to the new coronavirus crisis have struck many Japanese as tardy and inconsistent. Suga will be unable to take effective measures to tackle this public health challenge unless he humbly recognizes flaws in the administration’s handling of the crisis and learns lessons from the policy blunders.

Suga’s victory in the LDP leadership race was secured even before the election was officially announced as five party factions decided to support him.

Even though he likes to stress that he is not a member of any faction, Suga should not forget that he climbed to the top only by riding on a haphazard alliance among factions that simply jumped on the bandwagon, a political play that has nothing to do with public interest.

Suga is set to be elected as prime minister in a Sept. 16 extraordinary Diet session and launch his own Cabinet. Although he has vowed to give Cabinet portfolios to reform-minded lawmakers without considering the desires of factions concerning Cabinet appointments, it is not clear whether he can parry pressure from the factions that helped him grab power.

When he organizes his Cabinet, Suga will face the first test of his commitment to his pledge to form a “Cabinet that works for the people.”

Suga also called for unity among LDP members under the party’s banner. If he really wants a unified ruling party, Suga should give important Cabinet posts to the other two contenders in the leadership race--Fumio Kishida, chief of the LDP’s Policy Research Council, and Shigeru Ishiba, a former defense minister and former secretary-general of the LDP.

Such a move would help cure one major problem with Abe’s political style, which was intolerance to criticism and not supportive of lively policy debate within the party.