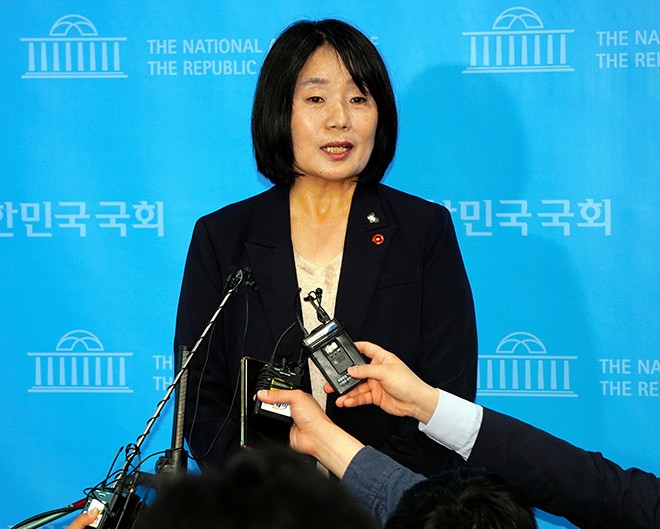 Yoon Mee-hyang, former head of the Korean Council for Justice and Remembrance for the Issues of Military Sexual Slavery by Japan, speaks before reporters at the Korean National Assembly in Seoul on May 29, 2020. (Asahi Shimbun file photo)

SEOUL--South Korean prosecutors on Monday indicted the former leader of an advocacy group for victims of Japanese wartime sexual exploitation on charges of fraud and embezzlement.

Yoon Mee-hyang stepped down as head of the Korean Council for Justice and Remembrance for the Issues of Military Sexual Slavery by Japan, better known as Jungdaehyup, this year to launch a successful bid for a seat in parliament, where she now serves as a member of the ruling party.

Since then, she has been dogged by allegations that she used government subsidies for her own benefit, rather than to help the “comfort women.”

Prosecutors said in a statement, Yoon was charged on eight counts, including illegally receiving hundreds of thousands of dollars in government subsidies, spending donations to the non-profit group on personal purchases, and compelling a victim who was suffering from Alzheimer’s disease to donate to the foundation, among other crimes.

Calls to Yoon and to the group she used to lead were not answered, but Yonhap news agency reported that she released a statement expressing regret over the charges, vowing to prove her innocence in court, and apologizing for causing controversy.

In May, Lee Yong-soo, a prominent victim and activist, accused Yoon of exploiting the women to garner government funds and public donations while spending little money on them.

The feud threatens to undermine the wartime sexual violence movement, led for decades by Yoon, Lee and Jungdaehyup, which together played a key role in effectively nullifying a 2015 settlement with Japan.

The issue remains a major factor in fraught relations between the two U.S. allies.