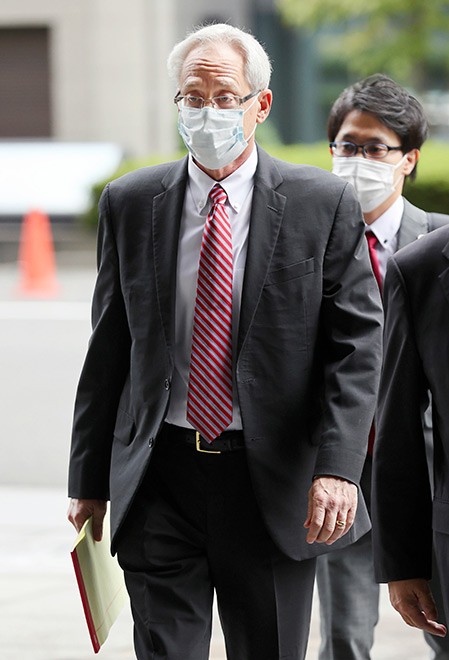 The long-awaited trial into the tangled finances of fugitive former Nissan Motor Co. Chairman Carlos Ghosn opened Sept. 15 in Tokyo with Greg Kelly, a former executive of the company, entering a plea of innocent on charges he understated Ghosn’s annual remuneration by 9.1 billion yen ($85.8 million) over several years.

Kelly, a U.S. citizen, denied he was involved in a conspiracy to underreport Ghosn's income during the hearing held at the Tokyo District Court.

Kelly, 64, maintained that he legitimately considered ways to ensure his boss would stay with Nissan even after his retirement from Nissan’s board.

He is charged with violating the Financial Instruments and Exchange Law by helping Ghosn conceal his total income, alongside the former chairman.

Nissan, which is also indicted as a company, pleaded guilty to the charges against it.

The trial at the district court is the first of a series involving Nissan and its former executives.

It seems doubtful that Ghosn will ever face trial in Japan as he staged a dramatic escape to Lebanon in late December while out on bail from the Tokyo Detention Center, where he had been held for months. There is no extradition treaty between the two countries.

Ghosn was also indicted for special breach of trust for allegedly transferring Nissan funds to a friend in the Middle East.

According to prosecutors, Ghosn’s remuneration from fiscal 2010 to fiscal 2017 totaled 17 billion yen. Prosecutors allege that Kelly and Ghosn conspired to hide about 9.1 billion yen by entering only about 7.9 billion yen in the automaker’s financial reports over the eight-year period.

The trial hinges on two points: whether there were payments that Nissan had committed to but had not made yet to Ghosn and whether Ghosn and Kelly conspired to underreport the former chairman's remuneration.

Prosecutors allege that Ghosn’s overall income was divided into the pay he received each fiscal year and the pay Nissan would log as a consultation fee or something else after he left the Nissan board.

As evidence, prosecutors are expected to present a document on an agreement between Ghosn and Toshikai Onuma, the former chief of Nissan’s secretary’s office.

Prosecutors assert that the total income--the payments made and the payments not made--were listed down to the 1-yen level in the document, which was signed by Ghosn and Onuma.

They allege that Kelly considered ways to make the payment that Nissan had committed to based on his knowledge of the arrangement to conceal Ghosn’s remuneration.

The defense team for Kelly is expected to contend that Ghosn’s total income was listed in its entirety in the financial reports and that no arrangements existed to make additional payments to him.

The defense lawyers will also argue that their client was not involved in producing the document that prosecutors contend is proof of an agreement.

Kelly worked on a draft contract aimed at making a one-off payment or payments in other guises to Ghosn to retain him as special adviser and honorary chairman after he retired from Nissan’s board.

He will argue that accounting in this fashion is perfectly legal as it was designed to reward Ghosn for his service to Nissan following his retirement and does not constitute a deferred payment of Ghosn's income as chairman.

Onuma and Hari Nada, a Nissan executive, were involved in plea-bargaining with the special squad of investigators at the Tokyo District Public Prosecutors Office. Indictments against them were dropped after they agreed to provide documents and other evidence to support the claim of underreporting and testify in court.

The credibility of their testimony will be one focus of the trial.

The trial is scheduled to last through July, with a ruling to be handed down later.