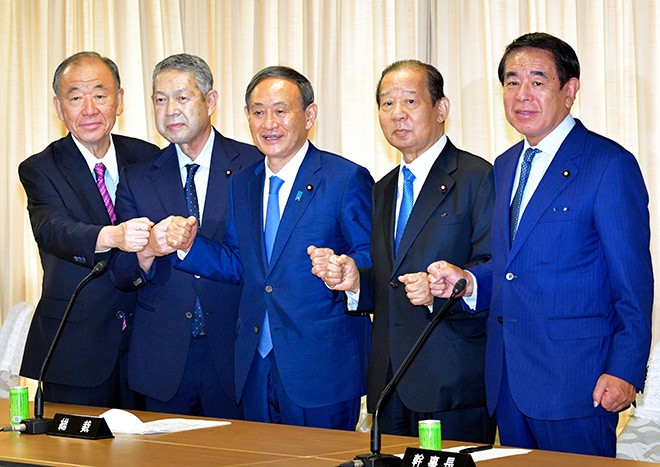 As heir apparent to outgoing Prime Minister Shinzo Abe, Yoshihide Suga’s first task on taking over will be to pick a successor for the job he held for nearly eight years.

According to sources, Suga is leaning toward picking Katsunobu Kato, 64, as his chief Cabinet secretary. Suga served as the government's most senior spokesman for the entirety of Abe's term in office.

Kato currently serves as health minister and is a close confidante of Abe. He also once served under Suga as deputy chief Cabinet secretary.

After his election as president of the ruling Liberal Democratic Party on Sept. 14, Suga formally approved his choices for LDP executives on the afternoon of Sept. 15.

Toshihiro Nikai, 81, who was instrumental in creating the momentum among LDP lawmakers that led to Suga's landslide victory in the party's leadership race, will be retained as the powerful secretary-general.

Hiroshi Moriyama will also be retained as Diet Affairs Committee. Nikai, Sato, Shimomura, Yamaguchi and Moriyama come from the five major LDP factions that threw their support behind Suga even before the official start of the party presidential campaign. Their loyalty was rewarded with a sharing of the top party posts.

Suga began his first day as LDP president continuing with his daily routine of taking an early morning walk for about 40 minutes. He met with aides for a meeting at a Tokyo hotel before going to the prime minister’s official residence.

The last formal meeting of the Abe Cabinet was held from 10 a.m. A gathering on Sept. 16 will be a ceremonial one in which Cabinet ministers all submit their resignations, setting the stage for Suga to begin the process of forming his own Cabinet.

After the Sept. 15 Cabinet meeting, Ryota Takeda, the state minister in charge of disaster prevention, was asked about his expectations for Suga as prime minister.

“Due to the novel coronavirus pandemic, I believe all Japanese hold something heavy in their hearts,” Takeda said. “I believe the most important thing will be to present a bright vision to the public so they can cut away from such feelings.”

While Suga indicated during a news conference on Sept. 14 that he would make his Cabinet picks based on whether the individual is passionate about pushing through reform and in agreement with him about policy matters, sources also said that Suga had decided to retain Taro Aso in his post as finance minister.

At a Sept. 15 news conference, Aso again indicated that an early snap Lower House election was likely given that the Tokyo Olympics are scheduled for next year, which would make it difficult to hold an election in 2021.

Suga also met on Sept. 15 with Natsuo Yamaguchi, the head of junior coalition partner Komeito, and they signed an agreement to continue with the coalition arrangement.

An extraordinary Diet session will be held on Sept. 16 in which Suga will be formally voted in as prime minister. His Cabinet will be formed later that day.

(This article was written by Takahiro Okubo, Asako Myoraku and Ryutaro Abe.)