Yukio Edano, leader of the new Constitutional Democratic Party of Japan, pledges to make his party a viable alternative to the ruling Liberal Democratic Party at a convention marking the opposition force’s inauguration on Sept. 15. (Footage by Nobuo Fujiwara) 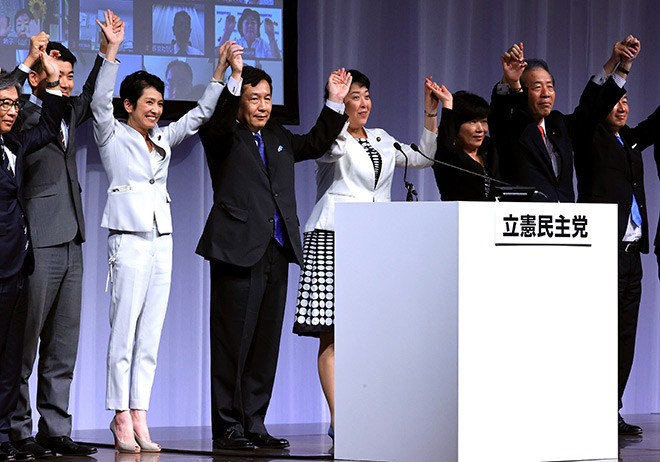 Yukio Edano, fourth from left, and other members of the new Constitutional Democratic Party of Japan at a convention to mark the inauguration of the new party in Tokyo on Sept. 15 (Kazuhiro Nagashima)

Yukio Edano acknowledged years of failure in challenging the ruling coalition, but he insisted on Sept. 15 that the new main opposition party has the numbers and policies to give voters a viable alternative.

Edano, leader of the new Constitutional Democratic Party of Japan, may have little time to pull the fractious opposition bloc together. Calls are growing within the ruling Liberal Democratic Party for a dissolution of the Lower House and a snap election as early as this year.

The new CDP, with 150 lawmakers, held a convention on Sept. 15 to mark its inauguration. It is the product of the merger between the old CDP, led by Edano, and the Democratic Party for the People.

At the convention, Edano apologized for having failed to make the old CDP a realistic choice to the public to replace the LDP.

“The path of the past nearly eight years was extremely difficult,” he said. “To many members of the public, there were few viable political options.”

Over that period, the LDP regained power and the administration of Prime Minister Shinzo Abe took over.

Edano noted that opposition parties have allowed the LDP to win in every national election since Abe’s Cabinet was formed in December 2012, a political landscape described as “one strong, many weak.”

But the new CDP has gained sufficient strength to threaten the LDP’s domination, Edano said.

“In the Lower House of the Diet, our party has more than 100 members, a level that serves as a launching pad for change of power,” he said.

Abe has resigned for health reasons and his chief Cabinet secretary, Yoshihide Suga, has been elected as his successor.

Edano said Suga takes over an unfavorable legacy of the Abe administration.

He portrayed the LDP as a party of new liberalism that fuels excessive competition and pursues self-responsibility and people’s self-help as top priorities.

He also said a Japan led by the LDP is a country where official documents are tampered with and the truth is buried in darkness.

The CDP, however, will strive to achieve a society where people help each other and to build a country where official documents are properly managed and released and where justice prevails, he said.

Edano said his party’s economic policy will push for a temporary reduction in the consumption tax rate and grant income tax exemptions for low-income households.

At the convention, party members approved of the CDP’s senior lineup, including Upper House member Tetsuro Fukuyama, who will continue to serve as secretary-general and Edano’s right-hand man.

Hirofumi Hirano will become the party’s acting leader and chief of the election strategy committee.

Kenta Izumi, who was defeated by Edano in the party’s leadership election on Sept. 10, will head the policy research council.

The appointments of Hirano and Izumi, both from the DPP, were apparently made to prevent the new force from splitting apart like the Democratic Party of Japan, which had disintegrated into the CDP and DPP.

A number of DPP members decided against joining the new CDP. Yuichiro Tamaki, head of the DPP, and 14 other party legislators from both Diet chambers, gathered to mark the inauguration of the new DPP.

(This article was written by Maho Yoshikawa and Hiroki Koizumi.)