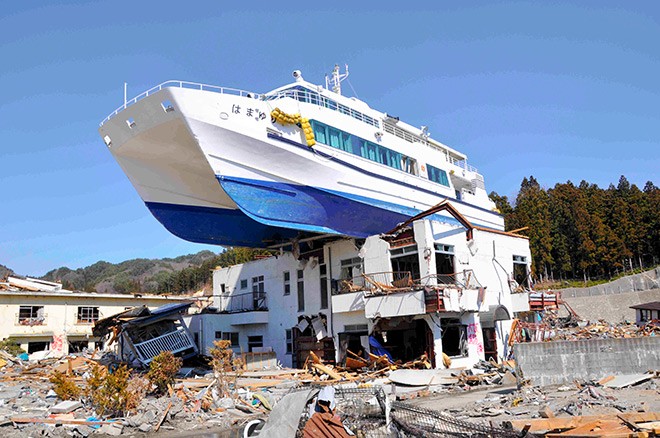 The Hamayuri sightseeing boat, which was thrust atop an inn by the massive tsunami triggered by the 2011 Great East Japan Earthquake, in Otsuchi, Iwate Prefecture, in April 2011 (Asahi Shimbun file photo)

OTSUCHI, Iwate Prefecture--An inn here that became one of the most iconic symbols of the deadly force of the tsunami triggered by the 2011 Great East Japan Earthquake is to be torn down, nine and a half years after the disaster.

The harrowing image of the boat named Hamayuri stranded atop the inn in the tsunami's wake was featured in news coverage around the world.

The local government of this coastal town initially sought ways to preserve the damaged inn, but after years of debate and personnel changes, authorities finally decided to tear down what remains of the building.

The original Hamayuri was removed and dismantled two months after the disaster as the city government of Kamaishi in the prefecture that owned it deemed the vessel “dangerous.”

But former residents of Otsuchi and artists who resided outside the prefecture mounted a campaign to produce a replica of the boat. The owner of the inn also agreed to the plan.

Kazuko Furudate, who chairs a nonprofit organization that has worked to restore the boat and preserve the site, was disappointed with the decision to scrap the inn.

“The disaster destroyed many areas, but Otsuchi in particular incurred enormous damage,” she said. “Yet, not even one relic of the disaster is going to be preserved here? That doesn’t make sense. I feel sorry for my children's and grandchildren's generations.”

In 2012, the town government decided to back the campaign to make the replica of the boat and maintain the area surrounding the inn and enacted an ordinance to raise money for the project.

The estimated cost of the project was 450 million yen ($4.3 million), the town said.

But only 3.95 million yen has been collected to date.

By the time the ordinance was enacted, the passion to preserve the remains even among supporters had begun to fade.

Many town residents have also consistently opposed the idea to preserve the “ugly” sight of the inn, which reminds them of the tragedy.

As reconstruction progressed, demands to dismantle and remove the inn grew louder.

As mayors have come and gone, town policies have also changed.

The mayor who enacted the ordinance backed the idea to make the 2011 disaster a part of the “culture of Otsuchi.”

The town government’s building was in fact another relic of the disaster, as 39 employees died there after towering tsunami slammed into the concrete structure.

The mayor wanted to preserve the building as well, hoping that such relics would attract visitors to Otsuchi.

But when a new mayor took office in 2015, the town shifted toward preserving the legacy of the disaster “without relying on buildings," and the old town government building was eventually dismantled in 2019.

Costs of such demolition work have been subsidized by the central government as part of reconstruction efforts. But the support will be no longer available after the end of fiscal 2020.

Faced with that reality, the owner of the inn decided to accept the town's new policy and agreed to get rid of the inn's remains.

The town assembly on Sept. 11 passed a supplementary spending bill that includes 40 million yen for the cost to dismantle the inn.

Still, the vote was close, with many assembly members pointing out that the town government presented the budget to dismantle the inn, yet kept the ordinance set up to ask for donations to preserve it.

In the end, six votes in favor of the proposed budget and five votes against it were cast.

The government is expected to seek understanding from people who donated funds to preserve the inn and create a replica of the Hamayuri.

It plans to revise the ordinance so that the money can be used for other ways to preserve the legacy of the disaster.