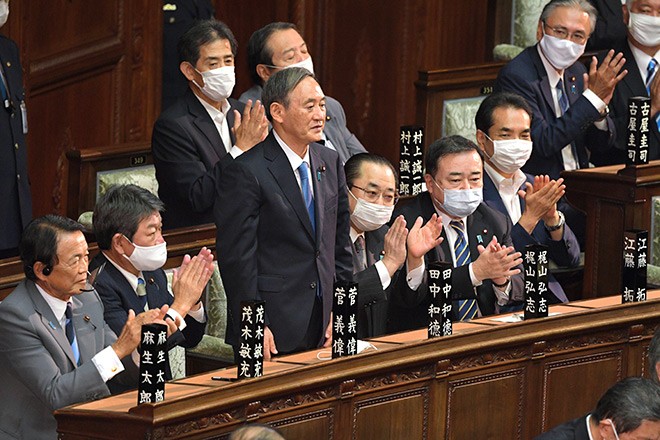 Yoshihide Suga acknowledges the applause in the Lower House plenary session on Sept. 16 after he was voted in as prime minister. (Kotaro Ebara)

Yoshihide Suga easily won election as prime minister in the Diet on Sept. 16 but now faces the more difficult challenge of leading Japan through the COVID-19 pandemic and its devastating economic effects.

With the backing of his ruling Liberal Democratic Party and junior coalition partner Komeito, Suga received 314 votes in the 465-member Lower House and 142 votes in the 245-member Upper House.

He succeeds Shinzo Abe who only in August broke the record for consecutive tenure as prime minister.

Suga himself set the consecutive tenure record for a chief Cabinet secretary, the top government spokesman, by serving in that post under Abe for 2,822 days.

He will form his administration later on Sept. 16 but already decided to retain eight Cabinet ministers, making good on his pledge during the campaign for the LDP presidency that he would continue the policy course set by his predecessor.

Lawmakers who held posts in past Abe Cabinets will be brought back, such as new Justice Minister Yoko Kamikawa and Norihisa Tamura, the new health minister.

There were no major changes in key LDP posts, as Suga kept Toshihiro Nikai as secretary-general and Hiroshi Moriyama as Diet Affairs Committee chairman.

Suga also retained Kazuhiro Sugita as the deputy chief Cabinet secretary in which he will serve as the top central government bureaucrat.

Longtime associate Hiroto Izumi will be a special adviser to the prime minister.

Suga emphasized that he wants to push for greater deregulation and create a digitization agency that will increase the use of the internet in handling administrative matters.

The novel coronavirus pandemic made clear that government ministries were behind the times in allowing citizens to complete paperwork remotely.

On the other hand, Suga does not have much experience in foreign affairs and national security, so it remains to be seen what kind of policy initiatives he makes in those areas.

The Abe administration was plagued by a number of scandals over suspected favoritism. Abe resigned in late August over health concerns without clearing up questions about those scandals.

Suga has already indicated that he believes those incidents have already been wrapped up.

For example, he said there was no further need for an investigation into the doctoring of public documents concerning the heavily discounted sale of state-owned land to the Moritomo Gakuen educational institution, which had connections to Abe’s wife, Akie.

The widow of a Finance Ministry bureaucrat who committed suicide after being pressured to alter the documents has demanded the government reopen the investigation.

The term of Lower House members ends in October 2021, but Aso and other politicians have suggested that Suga call an early snap election.

Suga, however, has said that he wants to first ensure that the COVID-19 pandemic is under control before making such an important political decision.

* Minister for promoting dynamic engagement of all citizens: