EDITORIAL: Suga government should not be continuation of Abe’s politics 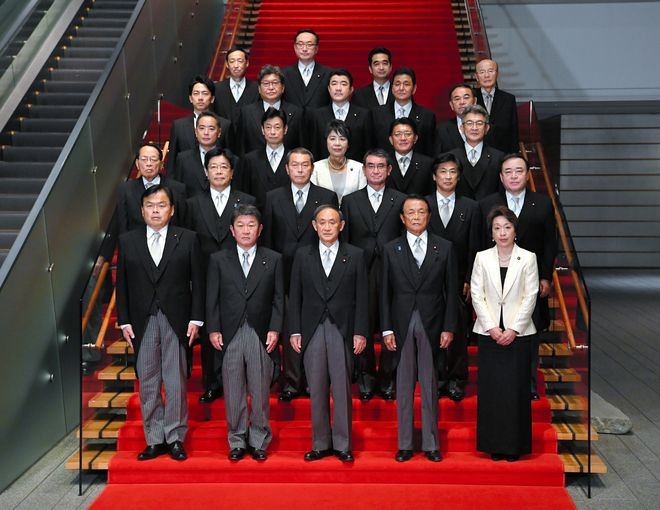 Prime Minister Yoshihide Suga and his Cabinet ministers pose for a photo session in the prime minister's office on Sept. 16. (The Asahi Shimbun)

Newly elected Prime Minister Yoshihide Suga’s Cabinet picks clearly signal that his government will inherit all the key elements of the former Abe administration--not just its basic policies but also its key officials and policymaking approaches.

The lineup of the Suga Cabinet has cast serious doubt on whether he can break the policy impasses created by the seven years and eight months of Shinzo Abe's reign and repair the damaged foundation of democracy.

HOW SUGA CAN AVOID LABEL OF INTERIM LEADER

As he organized his first Cabinet on Sept. 16, Suga reappointed eight ministers from his predecessor’s team and allowed three to slip into another portfolio.

To be sure, a couple of Suga’s Cabinet appointments reflect his own ideas, such as giving the administrative reform portfolio to former Defense Minister Taro Kono, a leading champion of the cause, and creating a new Cabinet post in charge of digitizing the government’s operations.

As a whole, however, Suga’s team can be described as “the Abe Cabinet slightly reorganized.”

Taro Aso, who concurrently serves as deputy prime minister and finance minister, has also retained his job. Aso, a sworn ally of Abe who supported the former prime minister’s administration as its political linchpin, refused to take political responsibility for his ministry’s falsifications of official documents related to the dubious sale of state-owned land to school operator Moritomo Gakuen, which was unprecedented malfeasance.

But Suga showed no hesitation in keeping Aso as the second-ranking administration official. By doing so, Suga has made clear his priority is on securing his power base, not restoring public trust in politics.

Suga’s appointments for the executive posts at the ruling Liberal Democratic Party, announced before the new Cabinet members, reflected his dependence on party factions for his political standing.

Suga retained Toshihiro Nikai as LDP secretary-general as he allowed the key party posts to be divvied up among veteran politicians belonging to the five factions that supported him in the party leadership election.

Suga has stressed his affiliation with no faction and promised to give no consideration to the wishes of any groups concerning appointments. But his picks for senior party posts were basically political rewards for supporting his rise to the top and well balanced among the factions.

In a nutshell, the change of leadership is nothing but an attempt by the core officials of the Abe administration to maintain the power structure by just replacing the head.

Despite the first advent of a new national leader in about eight years, there is no euphoria surrounding the Suga Cabinet.

Only two Cabinet posts have been given to women, while those who have joined the Cabinet for the first time are mostly veterans who have long been waiting in the wings.

Suga may claim that he has chosen steady, experienced hands for his Cabinet. But his choices lack political dynamism.

Suga’s term as LDP president expires in September next year at the end of Abe’s unfinished term. If he wants to avoid being seen as an interim leader, Suga needs to make tangible achievements in tackling policy challenges both on the domestic and diplomatic fronts.

There is no doubt that the top policy priority for the new administration will be dealing with the far-reaching effects of the new coronavirus pandemic, at least for the time being. While the spread of the virus has slowed somewhat, it is vital to prepare the nation for the autumn and winter influenza season, when both COVID-19 and ordinary flu cases could rise.

The government has to keep grappling with the formidable challenge of reinvigorating the economy while preventing a surge in new cases. To win broad public support and cooperation for the government’s actions to tackle the challenge, it is crucial for Suga to lead the efforts to provide meticulous explanations about the measures taken and disclose related information as much as possible.

Suga needs to understand that he will be unable to get the public on board if he gives brusque responses to questions as he often did during his news conferences as chief Cabinet secretary.

Even if he has come in just to pinch-hit for Abe, who suddenly resigned, Suga, as Japanese prime minister, has a heavy duty to tackle head-on the variety of tough challenges confronting the nation.

What is troubling is that Suga has failed to lay out a clear vision for the economic and social future of the nation during and after policy debates for the LDP leadership race.

Suga has repeated the slogan of “self-help, mutual help, public help and social bonds.” But he has not talked about his thoughts concerning a proper balance among the three kinds of “help” or his plan to achieve the goal.

Suga has also stressed his commitment to pushing through regulatory reforms by changing the highly compartmentalized structure of the government, removing the influence of vested interests on policymaking and breaking with the bad tradition of simply following precedents.

But these steps are nothing but means to accomplish goals. The question is what specific policy goals he has in mind.

Suga should disclose as soon as possible his views and thoughts about key policy issues, such as how to secure the financial sustainability of the social security system amid the shrinking of younger generations and aging of the population and what is a proper balance between burdens and benefits.

Globally, the battle between the United States and China for hegemony is intensifying. Suga should also swiftly map out a clear strategy for Japan’s actions to contribute to stability in the international community under these circumstances based on its close relations with both powers.

Suga should also take this opportunity to rectify the problems created by Abe’s political approach, which has distorted the policymaking process and eviscerated the role of the Diet.

Suga should never allow himself to inherit Abe’s flawed political style as well.

It is said, however, the Abe administration put little value on the specialized skills and abilities of bureaucrats of ministries and agencies, a tendency blamed for fostering a culture of "sontaku" (pre-emptive acts to ingratiate oneself to one's superiors).

The other day, Suga clearly stated that senior officials of ministries and agencies will be transferred if they oppose the policies adopted by the administration.

He has also brushed aside the criticism that the Cabinet Bureau of Personnel Affairs has been the primary factor behind the sontaku culture.

These remarks of Suga have raised concerns that more bureaucrats may start paying greater attention to what the prime minister’s office thinks than to the interests of the people.

Suga has also argued that the prime minister’s attendance at Diet sessions should be limited to occasions related to really important business, pointing out that the Japanese government chief has been forced to spend much more time at the Diet than other countries’ leaders.

This comment makes us worried about the possibility that Suga may emulate Abe, who often defaulted on his responsibility to explain his policy decisions and actions to the public and avoided Diet debate on sensitive policy issues as much as possible.

Some Cabinet members and ruling party politicians are calling on Suga to dissolve the Lower House quickly for a snap election while public expectations for the new administration are high.

An argument can be made for Suga, who has become prime minister only because of an alliance among LDP factions, to take the step to seek a public mandate.

But the first order of business for the new administration should be making all-out efforts to bring an end to the coronavirus crisis. Suga should not get his priorities wrong.