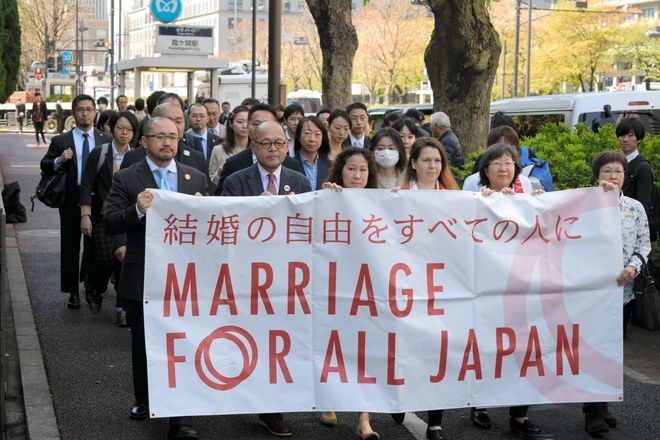 Miho Okada experienced the frustrating limits of measures introduced to protect the rights of same-sex couples when her lesbian partner was hospitalized with advanced rectal cancer in Aomori Prefecture.

Although Okada, 36, and Shoko Usami are certified as being in a “same-sex union” at the local level elsewhere in the country, the hospital said that “only the patient’s relatives will be notified in an emergency.”

Okada contacted a lawyer for talks with the hospital operator, but it refused to change its position.

Although dozens of municipalities are certifying same-gender partnerships, the central government has maintained its stance against recognizing same-sex marriages.

The lack of a national law or system protecting the rights of these couples has led to what Okada describes as “an inappropriate (situation) of being granted different rights in different areas.”

“We want more people to learn that whether the partnership program exists in a certain region is directly connected to life-relevant issues,” she said.

Since then, such mechanisms had been adopted at 50 other municipalities across the nation by the end of June, according to a survey conducted by the nonprofit organization Nijiiro Diversity and Shibuya Ward.

According to the survey, 1,052 same-sex couples have been certified under these systems. The total population of the 51 municipalities is about 34 million, accounting for 26.4 percent of Japan’s population.

Although these programs are not legally binding, businesses and medical centers in those areas have increasingly treated same-gender partners as “ordinary family” members in housing contracts and hospital visits.

However, these same-sex partnership programs are unavailable in the six prefectures of the Tohoku region, which includes Aomori Prefecture, and the three prefectures in the Hokuriku region.

Such certification systems are offered in only a limited number of prefectures in the Shikoku, Kyushu and Chugoku regions.

Same-sex couples are ineligible for income tax deductions like married couples, and it is impossible for them to share joint custody of children.

Most private businesses and local governments do not allow sexual minority workers to take child-rearing or nursing care leaves.

Many lawsuits have been filed nationwide against the government, arguing that its refusal to recognize same-gender marriages violates “marital freedom” and “legal equality for all” guaranteed by the Constitution.

According to the nonprofit organization Equal Marriage Alliance (EMA) Japan, same-gender marriages are legal in 28 countries and regions.
The same-sex marriage system was first introduced in the Netherlands in 2001.

The U.N. Human Rights Council in 2011 adopted a resolution that urged advanced nations to enact legislation to counter discrimination against sexual minorities.

Japan is currently the only Group of Seven nation that has no legal protection systems for those individuals.

Hiroyuki Taniguchi, an associate professor of international human rights law at Kanazawa University, said the problem in Japan stems from a “lack of awareness that the central government is responsible for eliminating discrimination.”

In fact, a deep-rooted tendency remains in the Japanese government and the ruling Liberal Democratic Party to stress the “traditional form of a family,” comprising a husband, wife and multiple children, Taniguchi said.

The LDP’s 2016 pamphlet expresses opposition to a same-sex marriage system, saying it “goes against our policy.”

Although three opposition parties in June 2019 submitted a Civil Law revision to recognize same-gender couples to the Lower House, sufficient discussions have not been held over the proposal.

In a survey in March and April this year by The Asahi Shimbun and the University of Tokyo, 46 percent of respondents said they support the introduction of the same-sex marriage mechanism, far exceeding 23 percent who are against the idea.

Even LDP supporters are generally positive toward a same-sex marriage system, according to the survey.

“Only a few people have come out publicly as gay, leaving the existence of sexual minorities invisible and making it difficult to take drastic political steps,” he said. “This forms a vicious circle.”

Yoshitaka Lawrence Shimoji, a sociology researcher at Ritsumeikan University who is knowledgeable about minority issues, called for reform of society.

“Some people say they have never come across sexual minorities, but there is a possibility that those around them simply have not come out of the closet,” he said. “We must change society in which those upfront about their sexual identities face discrimination. New systems are essential to better respond to diversity.”

(This article was written by Ananda Kokumai and Naomi Nishimura.)