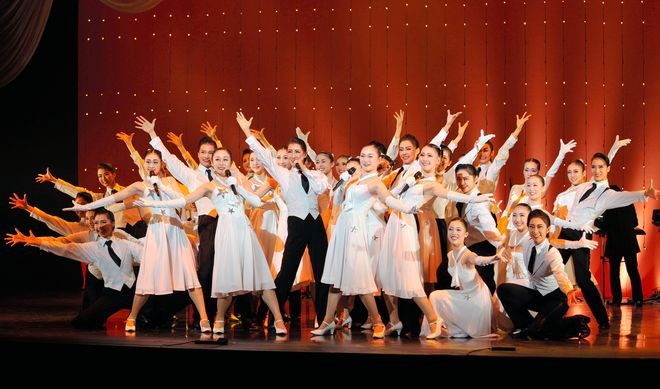 TAKARAZUKA, Hyogo Prefecture--Until recently, students at a renowned school here had to bow to trains with their older counterparts aboard, could not smile in front of the senior students and had to submit time-consuming homework to them.

It also ended a “tradition” under which a senior student supervised a younger one, which the academy faculty deemed as putting an unnecessary burden on younger students.

The moves come as society becomes increasingly conscious of the problems of excessive guidance and harassment in school clubs, resulting in the operator’s decision to give up traditional attitudes and codes of behavior.

“As students’ temperaments have changed, we have been making improvements in line with the trend of the times while respecting their autonomy,” said Kenshi Koba, vice principal of the school, referring to the recent reform.

Established in 1913 by Ichizo Kobayashi (1873-1957), the founder of what is now railway operator Hankyu Corp., the two-year educational institute offers lessons on vocal music, dance, drama and other subjects.

Those aged 15 to 18 are eligible for entrance into the institution and one in more than 20 applicants prove successful in its admission exam.

Only the school’s students are allowed to join the renowned theater troupe following graduation.

While 40 students study in its first and second grades each, most of those enrolled in the school live in a dormitory. The first- and second-year pupils are called “yokasei” (preparatory course students) and “honkasei” (regular course students), respectively.

Traditionally, the first-year students needed to clean the school building in the morning with a specific segment within the facility assigned to each student. The senior in charge of the same area a year before personally supervised her successor from various aspects of life from cleaning techniques to behavior at the academy.

After the system resulted in a first-year student falling ill several years ago, the school operator looked into the case and discovered that some junior pupils were forced to do undue homework.

The inspection revealed a practice was established five or so years ago where first-year students have to jot down questions about cleaning and other daily problems in notebooks to be submitted to their supervisors.

As those who write down more were highly evaluated, some first-year students filled in their notebooks while cutting back on sleep, according to the findings.

As a result, the school concluded senior students’ guidance went too far in some respects, stopped the notebook practice and started turning off lights at midnight to have students go to bed earlier.

The one-to-one instruction mechanism was also abandoned in spring 2019. Currently, students are responsible for a wider cleaning area in the school building in groups, leading to the discontinuation of the tradition of allocating one section to one person, according to academy representatives.

Koba explained why such excessive regulations were imposed on younger students.

“We have a decades-long tradition for students to deepen their bonds by showing the attitude of model students through in-person communication, and we left things to the students while respecting their autonomy,” Koba said.

Koba continued, “The practice was glamorized excessively by those who believe the difficult days as yokasei greatly helped them create who they are now, and some of the self-set rules apparently escalated.”

Among the unwritten restrictions that were long handed down but have already been scrapped are the “yoka-goto” (yokasei affairs) rules that force, for example, junior students to show a “yoka-gao” (yokasei face) frowning look with the corners of the mouth lowered in front of their second-year counterparts.

The regulations also demanded first-year students utter only such words as “yes,” “no” and “my apologies” when replying to older students, greet seniors from a distance in a loud voice and bow to Hankyu trains on which second-graders may be riding.

The education facility decided those customary rules are not necessary for nurturing proper stage performers. Although some students voiced opposition to scrapping them, the operator reportedly convinced them to change their minds through discussions on the issue.

In complying with the reform, the Takarazuka Music School revised its criteria concerning student life. While students were required to have their hair “black” before the amendment, the standards revised this past spring simply call on them to “keep your natural hair color.”

Academy officials said they have also prepared a system to offer mental health services for students as well.