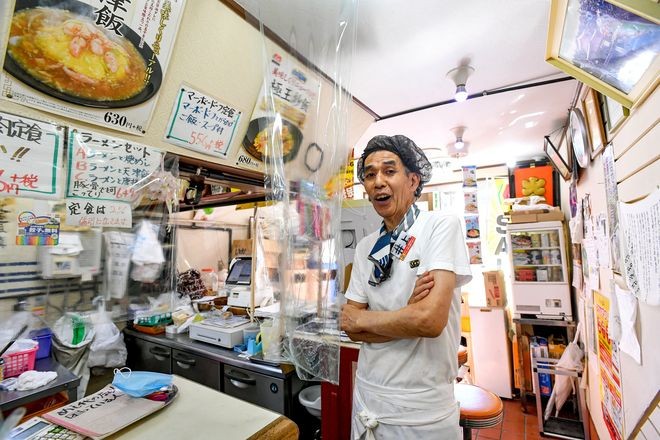 KYOTO--A small restaurant here that provided free food for 30,000 students who were willing to wash dishes will close its doors at the end of October.

Sadahiro Inoue, 70, manager of Gyoza Ohsho’s Demachi outlet in Kamigyo Ward, offered the unique service for decades, hoping that “young people would not have problems with food.”

Diners who washed dishes for 30 minutes could gobble up anything they liked for free.

The offer not only helped fill the stomachs of cash-strapped students, but it also provided the inspiration for a chapter in a popular manga series.

However, Inoue decided to shutter his store for good because of his advanced age and absence of a successor.

At the age of 20, Inoue effectively eloped and ran away from home because people around him opposed the marriage.

He held various jobs, such as a truck driver and food processing worker, but was forced to cut down on food expenditures while living in a six-tatami mat apartment.

A friend saw Inoue’s struggles and invited the couple over for dinner. The sukiyaki served at the friend’s home eventually led to Inoue’s free meal program.

“When you are struggling with hunger, having food will give you the strength to think about tomorrow,” Inoue said of his friend’s generosity. “This one meal will make a difference.”

He ran a different outlet of the Gyoza Ohsho chain in 1982 and started providing free meals for student dish washers.

He continued the special offer at the Demachi outlet, which opened in 1995 on the Demachi Masugata shopping street near Kyoto University, Doshisha University and Kyoto Prefectural University of Medicine.

Up to 10 students a day worked at the kitchen sink to pay for their food. Many of them did not have time to work at part-time jobs because of club activities, studying for exams, career planning and other reasons.

Although the dish-washing practice was abolished for hygienic reasons two years ago, the restaurant still provides free food to students who have yet to receive monthly remittances from their parents or have not eaten for a day.

Two to three people show up a month to take advantage of Inoue’s generosity.

Some graduates have returned to the restaurant to express their gratitude for Inoue’s kindness.

Inoue said he received 10,000 yen ($95.40) from one person for the “food costs of many students of my university, although this would cover less than one-thousandth of the total expenses.”

“I will never ever use this precious bill,” Inoue said.

Each time he is asked by regulars and other customers about why he is closing the shop, Inoue just says he “cannot help getting old.”

The number of students who have dined on the service has totaled 30,000.

“I want to thank the youngsters who have come to my restaurant,” Inoue said. “It makes me sad that I will not be able to see them again.”

The outlet is featured in “Oh Daddy Blues,” the 36th installment of the popular manga series “Torishimariyaku Shima Kosaku” (Assistant Director Kosaku Shima), which was released in 2003 by Kodansha Ltd.

In the manga, a restaurant’s poster states, “You can eat your fill with no payments if you wash dishes.” A Chinese entrepreneur who ate there as a student visits the eatery for the first time in 20 years, does kitchen work with protagonist Kosaku Shima, and is reunited with the restaurant manager.

Kenshi Hirokane, 73, the creator of the comic franchise, visited Inoue’s shop after learning about its free program.

After “Oh Daddy Blues” was published, Hirokane was dealing with dirty plates at the kitchen by himself.

“I was very impressed by the manager’s spirit, so I decided to cast a spotlight on the offer in my manga,” Hirokane said. “He must be like a god for students. If I were a student now, I would frequently go for washing dishes.”

Referring to the gyoza shop’s planned closure, Hirokane said, “I want to express my respect for all his efforts.”

A notebook on the eatery’s counter is full of messages of appreciation from diners, along with the names of the students and their colleges.

“I will show up again as soon as I receive my part-time wage,” one message says.
Another diner says in the notebook, “I almost cried when I felt full.”

Toshihiro Tarui, 43, said he was treated kindly there 20 years ago.

Originally from Fukushima, Tarui entered a private college in Kyoto Prefecture after studying for an additional four years following his graduation from high school.

He did not want to use his parents’ money, so he earned cash by working part time as a security guard and luggage carrier.

He also washed used tableware at Gyoza Ohsho two or three times a week for some gyoza and fried rice.

Tarui frequented the restaurant only when it was crowded during lunch hours to ensure there would be many dishes to wash.

“The manager always welcomed me, saying, ‘I am on your side because I used to be struggling like you,’” Tarui said. “I remember that as if it was yesterday.”

He is currently a teacher at an elementary school in Nagaoka, Niigata Prefecture.

“I was able to become what I am today because of the eatery manager,” Tarui said. “I cannot thank him enough.”