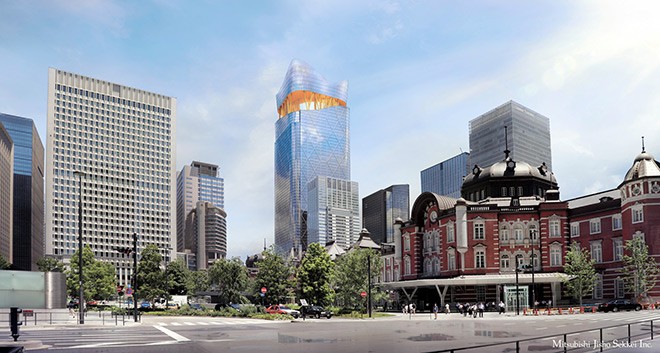 A skyscraper set to become Japan’s tallest at a staggering 390 meters will be called Torch Tower, its developer, Mitsubishi Estate Co., announced on Sept. 17.

The building, scheduled to be completed by fiscal year 2027, is part of a large-scale development block called Tokyo Torch, which will be located at the north side of JR Tokyo Station.

The project's stated vision is to "brighten and energize" Japan.

The new building will have 63 stories above ground, and its total floor space will be roughly 540,000 square meters.

The developer plans to start construction in fiscal 2023.

The landmark’s lower floors will accommodate commercial facilities and a hall boasting a rooftop garden that measures some 2,500 square meters.

The observation deck on the top area will be more than 350 meters high--taller than Tokyo Tower.

A luxury hotel will take up the upper floors, with about 100 guest rooms. The middle floors will be occupied by offices.

The major development comes amid a flurry of new skyscrapers planned for central Tokyo.

Mori Building Co. will construct in 2023 a skyscraper expected to be around 330 meters tall in Minato Ward’s Azabudai district.

That building will stretch higher than the current tallest skyscraper in Japan, the 300-meter-tall Abeno Harukas building, situated in Osaka’s Abeno Ward, and return the distinction to Tokyo.

Just four years from then, Torch Tower will break that record to claim the title of Japan’s tallest skyscraper.

Many redevelopment projects are planned or under way because the central government has been backing the private sector’s urban-regeneration effort since 2002.

The government eased regulations, such as on rules concerning limits on total floor size, to increase the number of lucrative skyscrapers gracing the skyline.

Although steady demand for office space has boosted redevelopment efforts, the pandemic has created uncertainty.

According to Sanko Estate Co., which specializes in helping firms find offices, the vacancy rate for large offices in central Tokyo was less than 1 percent even after the outbreak first hit. But the rate has steadily increased since April.

Mitsubishi Estate President Junichi Yoshida said that “we do not have a clear picture” about how the demand for office space will change in the future.

“Strategic decisions should be made in person,” he said. “If we make developments more attractive, the demand will rapidly grow.”

(This article was written by Takehiro Tomoda and Keiko Nannichi.)