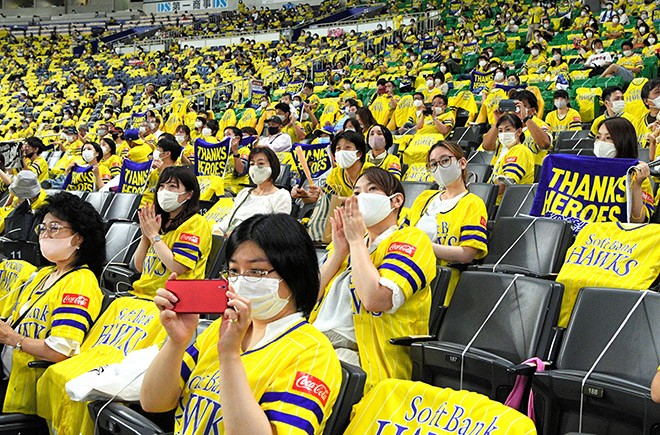 More Softbank Hawks fans fill seats at PayPay Dome in Fukuoka on Sept. 19, 2020, as entry restrictions for events to prevent a spread of COVID-19 infections were relaxed. (Motoki Nagasawa)

Sports fans welcomed a closer return to normalcy on Sept. 19 as they took advantage of a relaxing of government requests limiting the number of spectators at various events to help prevent the spread of the novel coronavirus.

Some pro baseball stadiums drew crowds in excess of 10,000 fans as the maximum crowd limit of 5,000 for sporting events was lifted that day.

For example, 13,106 fans turned out at Yokohama Stadium for the Sept. 19 game between the Yokohama DeNA BayStars and Yomiuri Giants.

Nippon Professional Baseball has set a policy of allowing up to 50 percent of a stadium’s capacity to be filled with fans. Yokohama Stadium’s capacity is 34,046, so it was about 38 percent full.

While more baseball fans can attend games now, they are still being asked to refrain from cheering out loud or exchanging high-fives after their team scores.

The J.League was also allowed to let in up to 50 percent of a stadium’s capacity, but the professional soccer league has decided to set the upper limit at 30 percent for the time being.

Some teams, such as FC Tokyo, are sticking to the 5,000-fan upper limit because the capital still has daily new cases of COVID-19 far in excess of other areas.

Movie theaters and venues for classical music concerts and theatrical productions could fill their locations to capacity because audiences normally do not cheer or shout out during performances.

However, many movie complexes are continuing with a 50-percent cap on their audiences.

Meanwhile, the Tokyo Big 6 university baseball league began its autumn competition from Sept. 19 and allowed the resumption of cheering by school bands and cheering squads.

The cheering sections were set up in the upper section of the outfield stands of Jingu Stadium in Tokyo where no fans were allowed in. Each school had about 100 band members and cheerleaders urging on their respective teams.

The COVID-19 pandemic led to a major delay in the spring season and the format was switched from the traditional one of playing a series until one team has two wins to a single game.

For the autumn competition, the universities will play two games against each other with no extra innings and the possibility of ties.