Suga government unlikely to budge on Okinawa base relocation issue 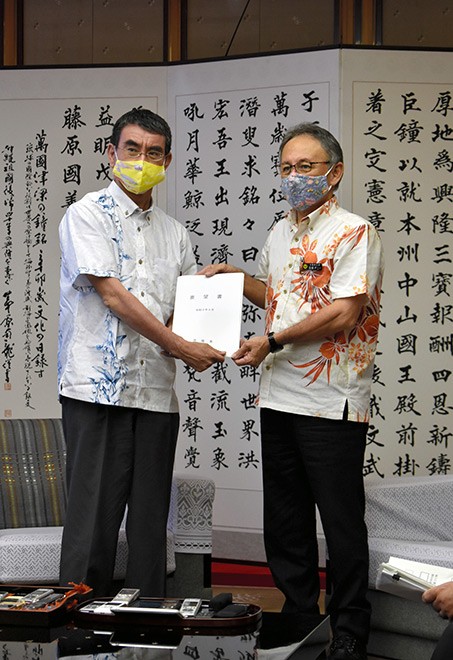 Newly minted minister Taro Kono visited Okinawa on Sept. 19 for talks with Governor Denny Tamaki although prefectural government officials were well aware that likely nothing would change in a row over the relocation of a U.S. military base.

That's because Prime Minister Yoshihide Suga was the prime proponent of pushing forward work in moving U.S. Marine Corps Air Station Futenma from Ginowan to the Henoko area of Nago, also in Okinawa Prefecture, when he served as chief Cabinet secretary.

Despite calls from various Okinawa governors to move the Futenma replacement outside the prefecture, Suga has not budged and was instrumental in beginning land reclamation work off the Henoko coast from December 2018.

Kono, state minister for Okinawa and Northern Territories affairs, became the first minister of the new Suga Cabinet to visit Okinawa, but that may have been because of his already close ties with Tamaki.

When Tamaki was still a Lower House member, he and Kono met once a week for breakfast.

During his meeting with Tamaki on Sept. 19, Kono said he would try to help in whatever way he could if contacted.

While Tamaki asked for about 300 billion yen ($2.9 billion) in central government funds for economic promotion measures, he also reminded Kono about heavy local opposition to constructing a new U.S. military base at Henoko, which has been expressed through gubernatorial elections and prefectural referendums.

It remains to be seen if Kono can set a different course for dealing with the southernmost prefecture because he essentially parroted a Suga line that any economic measure would be linked to the Okinawa prefectural government going along with the Henoko construction project.

Suga said on Sept. 3 when he was still chief Cabinet secretary that there was a connection between economic promotion and the base issue.

Tamaki countered on Sept. 11 saying cooperation on the base issue should not be used as a criteria for providing economic support to Okinawa.

But Suga has long made clear that economic promotion measures would not even be considered unless Okinawa was willing to compromise.

That was most clearly brought to light in how he dealt with Takeshi Onaga, who was elected Okinawa governor in 2014 on a platform pledging to stop the base move to Henoko.

Onaga asked for a review of the plan to move the base to Henoko as well as an early meeting with central government officials.

But Suga only met with Onaga four months later and even then the Okinawa governor later said he could not help but feel the chief Cabinet secretary believed he was in a superior position.

Despite Onaga’s requests, the central government pushed ahead with the project, triggering a series of suits and countersuits between the central and prefectural governments over approval of the land reclamation work.

At that time, Suga found a new way to deliver economic promotion funds to Okinawa.

After Onaga became governor, tax grants that have few strings attached were reduced to Okinawa every year. In its place, a new budgetary item was established that allowed the central government to directly provide subsidies to municipal governments and companies willing to cooperate with the Henoko project.

In a sense, the central government was using a carrot and stick approach to drive a wedge between the Okinawa prefectural and municipal governments.

It also appears that Suga was unfazed by the discovery of the soft sea floor off the Henoko coast. That will mean much more money will have to be pumped into the land reclamation work, which itself will take longer to complete.

(This article was written by Shohei Okada, Mika Kuniyoshi and Junya Sakamoto.)