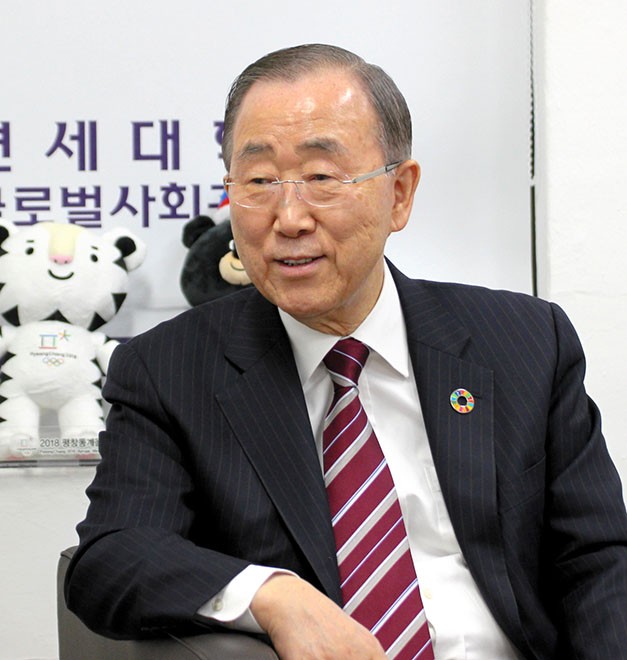 Ban Ki-moon, a former South Korean foreign minister who served as the U.N. secretary-general from 2007 to 2016 (Asahi Shimbun file photo)

They represent 20 NATO countries as well as Japan and South Korea.

Former Japanese prime minister Yukio Hatoyama, along with Makiko Tanaka, a former foreign minister, and her husband Naoki Tanaka, a former defense minister, also affixed their names to the document, urging the Japanese government to ratify the Treaty on the Prohibition of Nuclear Weapons.

The open letter was coordinated by the International Campaign to Abolish Nuclear Weapons (ICAN), an international nongovernmental organization that was awarded the Nobel Peace Prize in 2017.

The treaty that bans development, manufacturing, possession and use of nuclear weapons was adopted at the United Nations in 2017.

It will take effect 90 days after 50 countries ratify it.

So far, 44 countries and regions have ratified the treaty. But Japan is not one of them.

The Japanese government has stated that “it is necessary to maintain the U.S. nuclear deterrent capability under the Japan-U.S. alliance.”

“The risk of a nuclear weapon detonation today--whether by accident, miscalculation or design--appears to be increasing, with the recent deployment of new types of nuclear weapons, the abandonment of longstanding arms control agreements, and the very real danger of cyber-attacks on nuclear infrastructure,” the open letter states.

It points out that the 22 countries “claim protection” from U.S. nuclear weapons and urges the current leaders of these nations “to advance disarmament before it is too late.”

These countries “should reject any role for nuclear weapons in our defense,” the letter adds.

It goes on to say: “With close to 14,000 nuclear weapons located at dozens of sites across the globe and on submarines patrolling the oceans at all times, the capacity for destruction is beyond our imagination. All responsible leaders must act now to ensure that the horrors of 1945 are never repeated.”