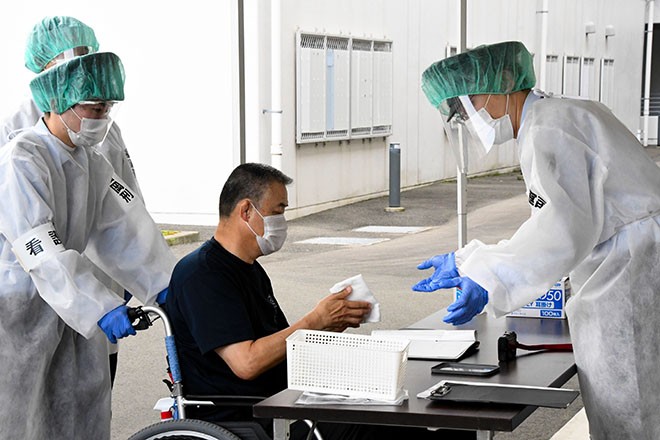 Officials at Fukuoka Prison conduct a COVID-19 drill in June based on the scenario of dealing with an inmate who is likely infected. (The Asahi Shimbun)

SAKAI, Osaka Prefecture--An inmate with a pre-existing condition plans to file a lawsuit against Osaka Prison, arguing that its rules have put him in a “life-threatening situation” of being infected with the novel coronavirus.

The convicted extortionist in his 60s, who is serving an eight-year prison sentence that was finalized in 2015, said he will demand the prison in Sakai, Osaka Prefecture, change its policies on mask-wearing and disinfectant to reduce the risk of infection among the inmates.

He underwent a renal transplant operation during his trial, so if he is infected with the novel coronavirus, he will likely develop severe symptoms, his lawyer, Ryota Ikeda, said.

The inmate said he is not being properly cared for, a clear violation of the law for protecting an individual’s body.

He is expected to file the lawsuit at the Osaka District Court’s Sakai Branch in October, Ikeda said.

It is rare in Japan for an inmate to ask a prison to practice infection control, Ikeda said. But the convict said his life is in danger because of a pre-existing condition.

According to the planned lawsuit, inmates at Osaka Prison are ordered to wear face masks while working in an area for prisoner activities. But they must remove the masks when moving between their cells and the workspace.

Hand sanitizer is not available at cells and the workspace, and measures to keep inmates at a safe distance from each other are inadequate, according to the man, who stays in a single cell.

A representative of Osaka Prison declined to discuss the inmate’s case but said the facility “has made arrangements for inmates not to face each other while working” to prevent the spread of infections.

The official also said hand sanitizer is not provided “because of the risk that inmates might drink it.”

And not allowing inmates to wear face masks while they move between their cells and the workspace is “for security reasons,” the representative said.

Prisons and detention facilities are potential novel coronavirus hotspots because they hold large numbers of people who work, exercise and eat together in limited spaces.

In fact, employees and detainees at facilities in Tokyo and Osaka Prefecture have tested positive for the virus.

Each facility has created a manual to act on the guidelines, the ministry said.

“Facility operators should consider the detainees’ health,” Sakamoto said. “Once an infection cluster occurs, it can spread outside the facility.”

He said the operators should let inmates wear masks at all times and provide hand sanitizer after increasing the level of oversight.

“It is the right thing to do,” Sakamoto said.