The Taushubetsu river bridge, known as the “phantom bridge,” in Kami-Shihoro, Hokkaido, displays its wear and tear. (Video by Shigehito Nakazawa) 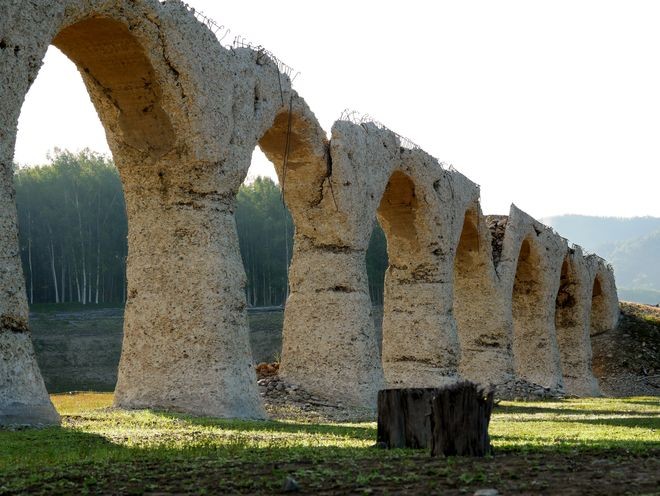 KAMI-SHIHORO, Hokkaido--It is known as the "phantom bridge" because the arched concrete span over Hokkaido's Lake Nukabirako vanishes from sight when water levels are adjusted by a dam on the Taushubetsugawa river.

But such is the decrepit state of the structure, this year could be the last time anyone will be able to view it before it collapses completely, experts say.

The elegant bridge was used by the former Japanese National Railways on its Shihoro Line route, but it is rapidly falling down. Even so, it still manages to impress visitors.

Located in the town of Kami-Shihoro to the north of Obihiro city, the Taushubetsu river bridge is designated as part of Hokkaido Heritage.

Some months ago, two major slips were confirmed that prompted an expert to warn that “this very year could be the last time the complete 11-arch structure can be viewed.”

The bridge is 130 meters long, 3 meters wide and 10 meters high. As first glance, it could be mistaken for a ruined Roman aqueduct.

The degradation is causing considerable heartache to fans of the bridge who have vowed to watch “its unstoppable breakdown” silently.

It was built in 1937 to help JNR cart lumber from the Taisetsuzan mountain range. As the shadow of World War II loomed, it was constructed mainly from locally secured gravel, not iron, due to a lack of materials.

Early on Sept. 8, the Higashi-Taisetsu Nature Guide Center, a nonprofit group, organized a tour of the landmark.

The participants were picked up by a van for the drive to Lake Nukabirako. After that, they walked on the dry lake bottom for a while, then the bridge came into sight.

Three upper sections of the bridge piers, which form V shapes, had collapsed.

Stones initially embedded in the bridge now lie on the lake bed. The bridge’s steel frame is exposed in many spots and its concrete surface is now rough and very cracked.

Masazumi Moriwaki, 22, a college student from Nara Prefecture who joined the tour, said the bridge is still magnificent.

“After seeing the condition of the bridge, it's clear that it is only a matter of time before it will be reduced to rubble,” Moriwaki said. “But the fact that it is still standing left a deep impression on me as its ruined state embodies the passage of time.”

Moriwaki was traveling in Hokkaido when he learned on a social networking site that the landscape featuring the Taushubetsu bridge will soon disappear and made up his mind to see it.

A 26-year-old company worker on a trip by motorcycle from Yokohama was also impressed.

“It was fantastic to view the precious heritage site,” the man said. “Seeing the state of the bridge stirred my spirits.”

After the end of World War II, it was decided to construct the Nukabira dam, which prompted JNR in 1955 to build another line to replace the older one. That marked the end of the structure’s role as a railway bridge.

The bridge has been left to weather the elements since then.

It starts to become submerged around May when water levels in the lake begin rising. It emerges over frozen water in January, when water levels start dropping, a cycle that has been repeated over more than 60 years.

The bridge decays at a much faster rate than others because water seeps deep inside its concrete structure in winter, freezes and expands, causing multiple cracks.

Because of this, “one year's worth of degradation for Taushubetsu is comparable to 50 years for normal bridges,” according to one estimate.

In September 2003, the top of Taushubetsu’s fifth pier from the south end toppled in the Tokachi-Oki earthquake, and the upper part of the fourth column broke off in April 2017.

In April this year, the upper section of the third pier, along with the section damaged in the Tokachi-Oki earthquake, sustained further damage.

“A series of collapses occurred this year, although only one case was confirmed over several years before that,” said Kawada, 60.

He noted that the pace of damage is especially noticeable after the bridge is submerged completely in water during winter like this year.

“It has long been said that the bridge will soon be nothing but ruins,” Kawada said. “I truly hope it can maintain its magnificent appearance of many connected arches for as long as possible.”

The Kami-Shihoro town government and Electric Power Development Co., which is responsible for management of the lake and the dam, say they will “simply watch its changes, letting nature take its course,” given the difficulty of maintaining the Taushubetsu bridge.

Kawada accepts that there is no alternative.

“It would be impossible to prevent the collapse of the bridge that undergoes the cycle of sinking and emerging,” Kawada said. “Even the process of collapsing is part of the attraction of the Taushubetsu river bridge.”

The tour organized by the Higashi-Taisetsu Nature Guide Center was suspended until late June due to the novel coronavirus pandemic.

The program normally ends in September, when the bridge disappears under water. But the water level in Lake Nukabirako is still low because of fewer rainfalls, so the center expects to hold the tour through October.

Three tours are offered daily: early in the morning, late morning and afternoon. Admission is 3,700 yen ($35.40), including tax, for adults. The program is available for a limited number of people as a countermeasure against the virus.