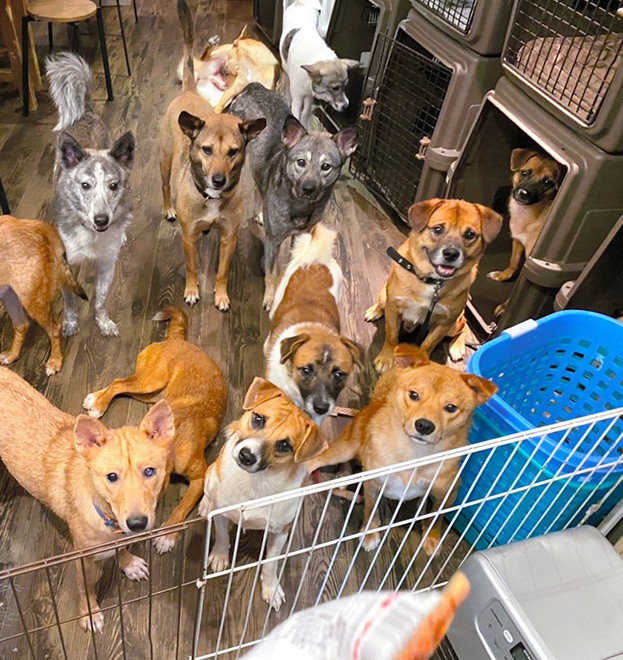 Animal rights activists who rescued dozens of dogs living in appallingly unsanitary conditions at the home of a known dog hoarder in June very nearly found themselves facing criminal charges for snatching the animals without permission.

As it turned out, a 56-year-old man who may or may not be the owner of the dogs but took the trouble to drop by the unoccupied house every two or three days to feed them was arrested for violating the animal law.

Because the dogs were seized without the owner's consent, prefectural police initially weighed arresting the group members on suspicion of theft. But police eventually found it difficult to build a case due to the ambiguity over the ownership of the dogs.

Police officers who entered the house in a residential area of Miki, Hyogo Prefecture, on June 24 were aghast at the conditions they encountered.

Feces, food and dog hair was knee-high all over the premises.

The officers had to wear goggles and masks because of the stench. Even so, some still came away with sore eyes and breathing difficulties.

The 56-year-old man who was arrested for keeping 66 dogs in foul conditions is a company employee. The man did not live in the house with the dogs, but visited every two or three days to feed them.

The canines did not have any health problems and were taken into custody by a prefectural animal protection facility in Miki.

The animal rights activists staged a “raid” on the house two days before the prefectural police moved in.

About 20 members broke in and rescued dozens of dogs in early hours of June 22.

The 47-year-old woman who led the raid told The Asahi Shimbun, “It was an emergency rescue operation.”

But legal experts disagreed and said the activists ought to be prosecuted for theft.

The woman, who heads an animal protection group in the prefecture, said she had heard about an incident in which a dog broke loose from the unoccupied house and bit a neighbor. She said there were other episodes as well.

On June 21, the day before the “rescue operation,” the woman was tipped off about the vile conditions inside the house by a fellow member who lives nearby.

The woman said she and her fellow activists concluded that there were way too many dogs living in the house for the owner to provide proper care.

They tried to contact an animal protection facility in Miki but were unable to do so because it was Sunday. The police told her that they were unable to enter the premises without a warrant, she added.

The woman said she realized the rescue operation could be considered illegal.

“We should have waited one more day,” she said. “But we couldn’t because it was too hot. I don’t think we made the wrong choice.”

According to neighbors, dogs have lived in the house for about the past 10 years.

The animal protection facility received a report this spring that a dog had escaped from the house.

Wanting to know about the dog's condition, a staff member went to the house and asked the man assumed to manage it for permission to go inside, but he refused.

The facility at that point had no way of knowing if the man was a hoarder and whether the dogs were being kept in inhumane conditions.

When the activists staged the raid, there were about 140 dogs in the house. But they were unable to take all the dogs, so they made off with several dozen.

The animal protection facility eventually put 66 of them under its protective custody.

Typically, in police investigations like this case, dogs are returned to the owner, the facility said.

But the man agreed to transfer the dogs to the group.

The woman's group received the 66 dogs from the facility and is now working with other animal rights groups to find new homes for them.

Taro Hayashi, a lawyer who specializes in animal abuse issues, said the woman and other activists’ actions left them liable to be accused of theft and other charges for taking the dogs without permission.

The Criminal Law states that an action taken under an emergency to save lives will not be punished. But it only applies to people.

“Under the Japanese legal structure, animals are treated as an object,” Hayashi said.

The woman and other activists in the case “should have rescued the dogs with other means, like asking for help from police and local administrative agencies and convincing the owner,” Hayashi said.

Prefectural police questioned the activists with an eye to building a theft case against them, according to investigative sources.

But police are not expected to pursue this in light of the difficulties in determining who is the actual owner of the dogs. The man who was arrested said he only managed the house and provided nominal care to the dogs, sources said.

The issue of animal hoarding has become acknowledged as a social problem in recent years.

Under the current animal law that was revised and took effect on June 1, local governments have the authority to conduct an on-site inspection when an owner is suspected to keep an animal in cruel conditions.