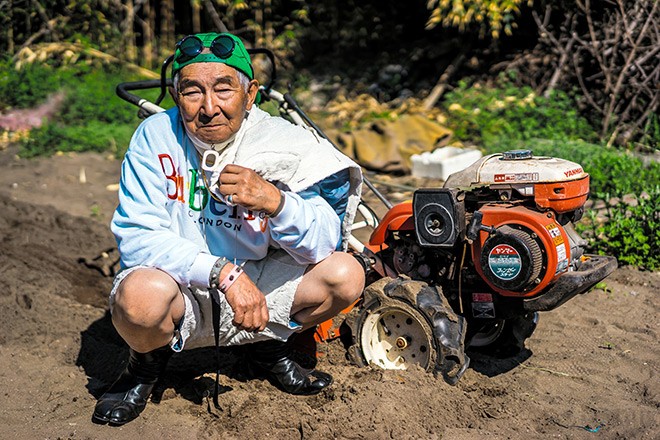 Looking ever so cool and dignified in Burberry, Prada and other designer brand clothing, an 86-year-old man from a northern prefecture has become a fashion icon on social media, even beyond Japan.

He goes by the name of Slvr. Tetsuya. The initials should be read as “silver,” a nod to the English word that refers to elderly people, also used broadly in Japan.

His climb to fame began when it dawned on Naoya Kudo, his fashion-conscious grandson, that it might be fun to dress his grandfather up in his own designer clothes.

What started out as a mere pastime for the pair has evolved into photo exhibitions and even the publication of a book.

“I had no idea myself if I was looking good in those clothes,” said Tetsuya, who kept a strict watch over students in disheveled clothes when he was a schoolteacher. “I was surprised because the way I looked attracted a lot of attention.”

The idea struck Kudo, a 30-year-old Tokyo ad agency employee, when he was sorting out his clothes for sale ahead of a visit to his hometown of Happo in Akita Prefecture in the spring of last year. He decided to send many of his clothes there.

At his home, Kudo had his grandfather don a leather jacket in the Buddhist altar room and took pictures of him. The photos turned out cooler than he had expected.

The wrinkles on the old man’s skin, the dignified look in his eyes, and the slight bend in his back--all those things had a persuasive and compelling power that could hold its own against the strong originality of the clothes.

Tetsuya gradually began proposing photo shoot locations himself. At one time, he operated a cultivator machine with his poulticed legs clad in mod boots.

“He continued with his farm work after the shoot was over. I was nervous about getting dirt on the expensive boots,” Kudo said, laughing.

Back in Tokyo, Kudo posted several of his photos on Twitter, which generated an endless succession of sound alerts as reactions poured in.

Domestic and foreign media outlets began covering the project, and the Instagram account now has about 150,000 followers, half of them outside Japan.

Many seem to find the incongruous images of an elderly man from a rural prefecture carrying farm tools, dressed in clothing of fashion houses he knows nothing about, irresistible.

“People began looking at him in a quite different light even though all he had done was changing his clothes,” Kudo said. “That says so much about the potential of fashion.”

Kadokawa Corp. published a collection of the photos this spring. The book’s title translates roughly as “Tetsuya, 85, turned out cooler than expected in his grandson’s clothes.”

Another exhibition of Tetsuya’s photos was held at Tokyo’s Isetan Shinjuku department store through Sept. 22.

“My father died at 42, and I had set the goal of living to be at least 84, double that age,” said Tetsuya, who was 84 at the time of last year’s photo shoots. “But I had never thought things would turn out this way. Perhaps I should know better than to go on like this until I’m 100.”

Kudo said many of the reactions say his grandfather looks better than him in the clothes.

One thing Kudo never expected was to be praised for his “wonderful” treatment of an elderly person.

“It never occurred to me that I was trying to be nice to him because he’s my grandfather,” he said. “Perhaps many tend to approach elderly people with condescension, but I think both sides will be happier if you are, like, ‘Why don’t we have fun together?’”