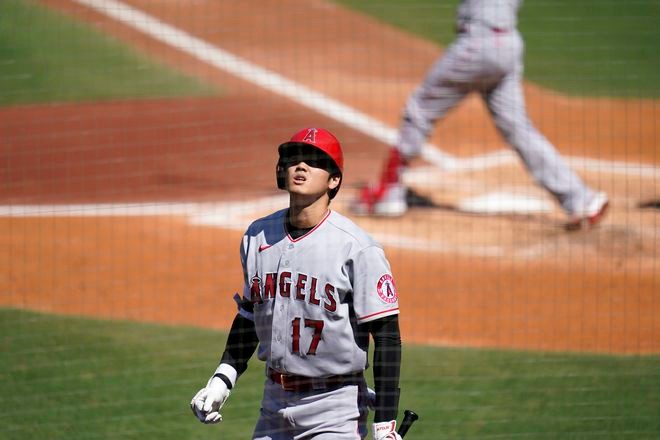 Los Angeles Angels’ Shohei Ohtani looks on as he waits to bat during the third inning of a baseball game against the San Diego Padres on Sept. 23 in San Diego. (AP Photo)

Struggling Shohei Ohtani went deep to ignite a three-homer barrage in the second inning to lift the visiting Los Angeles Angels to a 5-2 victory over the San Diego Padres on Wednesday.

Mike Clevinger opened the game for the Padres (34-22) and struck out two batters in the first inning. Clevinger, who hadn’t pitched since Sept. 13 due to biceps tenderness, did not start the second, however.

Padres manager Jayce Tingler announced after the game that Clevinger said his biceps “tightened up on him.” Clevinger was expected to have an MRI later Wednesday.

Eric Hosmer gave the Padres a 2-0 lead in the first, following a two-out double by Manny Machado with his ninth homer of the season. The blast was an opposite-field drive down the left-field foul line off Angels starter Jaime Barria.

Morejon walked the first hitter he faced ahead of Ohtani’s seventh homer of the season for the Angels (26-31).

Upton immediately gave Los Angeles the lead after going back-to-back with Ohtani, who entered the game with a .196 batting average. Morejon struck out Taylor Ward before Bemboom pulled his third homer of the season into the right-field seats.

The Angels scored their fifth run in the top of the sixth when David Fletcher’s line drive to left-center field bounced out of the glove of Padres left fielder Tommy Pham for an RBI single.

The Padres’ fifth loss in their last seven games prevented them from clinching the No. 4 seed in the National League playoffs. Meanwhile, the win kept the Angels’ faint playoff hopes alive. They are 13-6 over the last 19 games and won three of four against the Padres.

Morejon (2-2) took the loss. He was the second of eight pitchers used by the Padres on Wednesday.