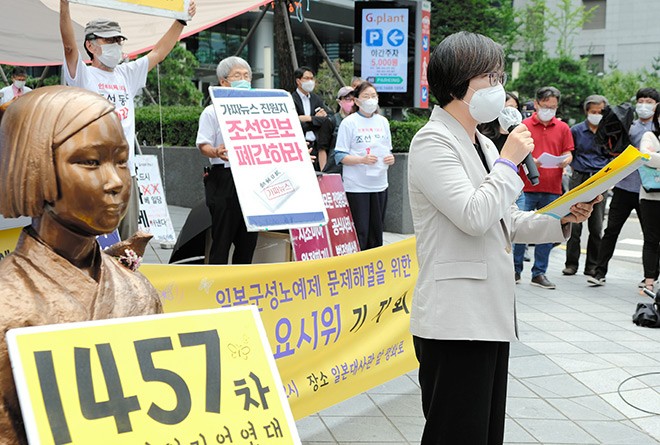 Lee Na-young, the head of the Seoul-based Korean Council for Justice and Remembrance for the Issues of Military Sexual Slavery by Japan, speaks at a weekly rally held in front of the Japanese Embassy on Sept. 16. (Takeshi Kamiya)

SEOUL--Two recent alleged monetary scandals at organizations helping former “comfort women” have raised questions here about how such entities have been handled in South Korea until now.

Some claim many people turned a blind eye to the underlying problems that always existed in such organizations because the groups were thought to be engaged in a nobler cause that should not be subject to criticism.

On Sept. 14, South Korean prosecutors indicted Yoon Mee-hyang, the former head of the Seoul-based Korean Council for Justice and Remembrance for the Issues of Military Sexual Slavery by Japan, for illegally accepting from the South Korean government and the Seoul municipal government about 360 million won (32.3 million yen, or $307,000) in subsidies between 2013 and 2020.

Yoon won a seat to the South Korean National Assembly in elections held in April.

The initial allegations against Yoon were raised by former comfort woman Lee Yong-su, 91.

In early May, Lee held a news conference and claimed that donations received by the council were not going to the former comfort women, who were forced to provide sex to Japanese military personnel before and during World War II.

The claim was damaging because Lee herself had long worked along with others in the council.

Later in May, Lee criticized the council for utilizing and defrauding the former comfort women.

Yoon has denied the charge and has refused to give up her assembly seat.

Also in May, whistleblowers at another organization helping comfort women came forward and said donations received by the organization were not being used to directly help the women.

That led to an investigation by a group made up of public and private officials of the House of Sharing in Gwangju, Gyeonggi-do province.

The investigation found that the social welfare organization operating the facility received a total of about 8.8 billion won in donations between 2015 and 2019.

The funds were raised after the organization said the money would be used to improve the lives and welfare of comfort women and continue to pass on their testimonies.

But the investigation found that only 2.3 percent of the donations went to the living facility where the former comfort women reside while the remainder was set aside as savings for future expenditures, such as construction.

In mid-August, the social welfare organization blasted the investigation as being distorted.

A South Korean researcher said, however, that there were concerns from the past that living conditions at the House of Sharing were bad.

“The comfort women issue has always been seen in the context of the conflict with Japan," said Kim Dae-wol, 35, one of the facility staff who blew the whistle on the House of Sharing, in a May TV news program.

"Those involved in the issue concentrated their efforts on demanding compensation and an apology from Japan. Problems were not allowed to surface because the issue became a ‘sacred area’ where other problems could not be presented.”

While Kim said he felt Japan still bore responsibility for the comfort women issue even after 1945, he blamed the South Korean government and society for negligence in not dealing with the specific problems at organizations that support the former comfort women.

Lee Na-young, the current head of the council for justice and remembrance, pointed to the increase in periodic donations to her organization in the wake of the scandal.

“It appears South Korean society has not turned its back on us,” Lee said.  "While we will carry on the organization’s rationale, we will also separate our activities from Yoon.”

She also touched upon the 1993 statement released in the name of Chief Cabinet Secretary Yohei Kono apologizing to the former comfort women.

“The two governments should reflect back on matters of significance, such as the Kono statement, and we hope to observe in a more flexible stance what Japan does from now,” Lee said.

Past coverage of the comfort women issue did not allow for critical analysis, said an official who served as a director of the Reconciliation and Healing Foundation, which was established following the December 2015 agreement between Japan and South Korea to provide financial assistance to the former comfort women.

“South Korean media and researchers who criticized organizations providing support to those who suffered under Japanese colonial rule were labeled as ‘pro-Japanese’ so there was a tendency toward self-censorship,” said Sim Gyu-seon, a former managing editor of South Korean newspaper Dong-a Ilbo.

But he added that because Lee Yong-su herself was a former comfort woman, her claims against the council served as an opportunity to finally allow for critical reporting and for various views on the issue to be expressed.

At the same time, Sim said the reporting on the scandal was not meant to reject the significance of the support efforts for the former comfort women, but was only a message asking that internal organizational problems be cleared up.