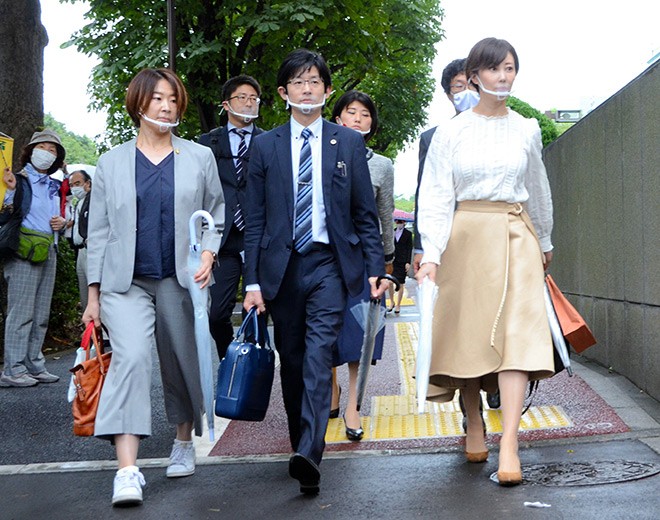 Lawyers enter the Tokyo District Court on Sept. 23 for a lawsuit against the government’s decision to ban the sex industry from the novel coronavirus relief program. (Eri Niiya)

A business operator who dispatches sex workers sued the government, arguing that its refusal to provide coronavirus relief grants and other assistance to the sex industry violates the constitutional guarantee of legal equality.

In the lawsuit filed at the Tokyo District Court on Sept. 23, the plaintiff in her 30s is demanding 4.5 million yen ($42,750) in unpaid grants and consolation money.

The total includes 2 million yen, a one-off payment to help small businesses weather the financial crisis resulting from the COVID-19 pandemic, and 960,000 yen in assistance for rent.

“I understand that society is divided over the sex industry,” the woman, who operates her business in the Kansai region, told The Asahi Shimbun. “But I want the government to recognize our job as a job.”

She said she was counting on the relief program after shutting her business from mid-April to early May in compliance with requests from local authorities to contain the virus.

However, the government decided that all workers in the sex industry were ineligible for the relief package.

In Diet sessions, government officials said that providing public assistance to sex industry workers “would not gain the understanding from the public in light of conventional wisdom.”

The only other entities excluded from the relief package were local governments, political organizations and religious groups.

The plaintiff argues that exclusion without reasonable grounds violates the principle of equality for all guaranteed under the Constitution.

She added that she runs a legitimate operation, pays taxes and has no connections with “anti-social forces,” a term used for gangsters and other underground organizations.

Lawyers raised more than 4 million yen for the lawsuit through crowdfunding. They described the legal action as a “public lawsuit” designed to resolve a social challenge.

“This case is about discrimination against people based on occupation, which has been exposed by the coronavirus pandemic,” Michiko Kameishi, one of lawyers representing the woman, said at a news conference after the suit was filed. “The court should firmly rule that people must not be discriminated against on the basis of ambiguous grounds.”

The plaintiff started working as a dispatched sex worker more than 10 years ago. She said she liked the job because it gave her financial resources and plenty of spare time.

After becoming independent, she started her own business and has contracted dozens of workers.

She said she is aware that society may not accept her type of business, but she considers it just an “ordinary job” like many others.

The woman recalled that a real estate agency once advised her to conceal her occupation in an application form to rent an apartment to “avoid possible trouble in the screening process.”

A doctor she sees for regular checkups also voiced his opposition to her business.

But she said she had believed that the government would treat her line of work in the same way as it does with other industries.

She said she held onto this belief because, like business operators in other sectors, she behaved responsibly to protect her staff and ran her company without getting involved in illegal activities.

So she was appalled when the government refused to provide financial relief to her business during the pandemic.

“Even the government is fueling prejudice against people working in the sex industry and ignoring their dignity,” she said.

She warned that the government’s mistreatment of the sex industry could expand to other sectors.

“I hope people will think about my case from the viewpoint that people in any line of work may one day experience discrimination for unreasonable reasons,” she said.

(Eri Niiya contributed to this article.)