With tourism down, Kyoto pulls menacing signs on manners 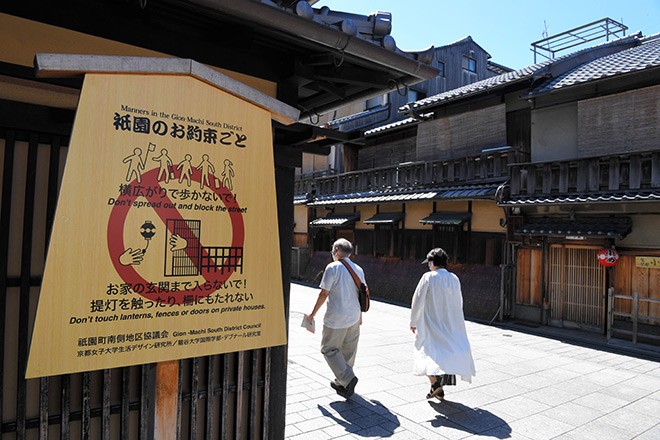 A new notice set up on Hanamikoji Street in Kyoto calls for good manners. (Kenta Sujino)

KYOTO--The Gion entertainment district here toned down its blunt and threatening demands for tourists to behave themselves after visitor numbers plummeted during the COVID-19 pandemic.

With the streets much quieter these days, the Gion-Machi South District Council reflected on its signs that are directed toward tourists and decided that its message was too harsh.

Two of the eight signs along the famous Hanamikoji Street were replaced on Sept. 8.

The notices were set up in October last year when the ancient capital was struggling with overtourism.

Many ill-mannered individuals mainly from overseas blocked roads and chased geisha and “maiko” apprentices to take pictures without their permission.

Frustrated by the unruly behavior, the council, comprising operators of traditional restaurants and eateries, set up the signs on Gion streets that feature “ochaya,” where geisha entertain patrons, and other establishments. Ochaya usually do not accept new customers without an introduction by a regular.

Although the regulation was not legally binding, it reflected the harsh attitude of the council to ensure proper manners.

The new signs do not mention possible fines or other grim warnings. They simply state in both Japanese and English, “don’t spread out and block the street” and “don’t touch lanterns, fences or doors on private houses.”

However, the council could reintroduce the original notices if a tourist influx again results in an increase in troublemakers.

“I hope the quiet, calm atmosphere typical of Gion will be maintained even after longtime customers return following the the coronavirus pandemic,” said Mimiko Takayasu, head of the Gion-Machi South District Council.

The government has imposed tight entry restrictions since the novel coronavirus began spreading in Japan earlier this year.

Exacerbating the decline in visitor numbers to the city, Kyoto Mayor Daisaku Kadokawa in April urged sightseers to stay away in an unusual request.

Major hotels in Kyoto were operating at 20.1 percent capacity in July, down 57.0 percentage points year on year.

Tourist numbers are now gradually recovering, but “effectively no guests” from outside Japan are staying overnight, Kyoto officials said.