Study: School closures stressful for youth who like studying 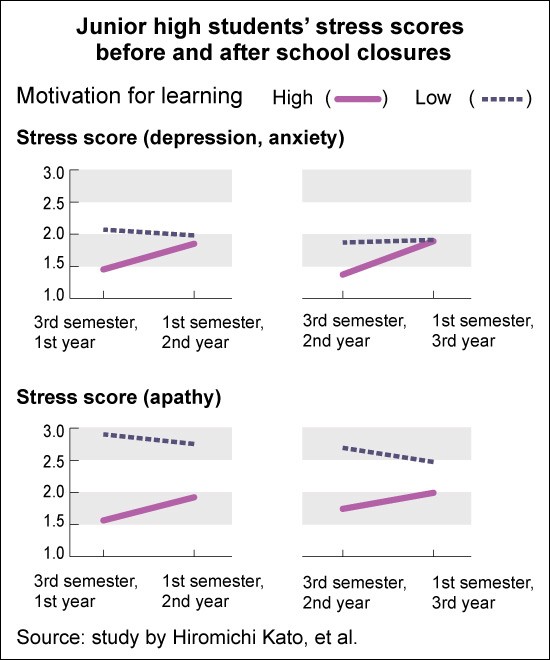 SAPPORO--Junior high school is already a stressful and awkward time for youths, but this year heaped extra pressure onto the most well-adjusted students, according to a new study.

Kids who like studying and going to school found it stressful this year as they were yanked from their normal environments when schools temporarily closed in spring because of the novel coronavirus, the research suggests.

But the study results, conducted by researchers at the Hokkaido University Faculty of Education, also showed it was not so hard on students who dislike going to school.

“You have to take a delicate approach to the matter, because the stress scores moved in one direction for children who find it fun to study and go to school but shifted in the other direction for those who don’t,” said Hiromichi Kato, an associate professor of developmental psychology.

He said parents, educators and caregivers should “take into account differences among individual students when providing care to them” in these kinds of instances.

The researchers surveyed about 200 students in their second and third years at a national junior high school in the Tokai region.

They asked the students in late May, when they returned to school following a closure over the coronavirus pandemic, about how stressed they felt during the closure. The researchers compared the results against the third semester of the previous school year.

In Japan, a school year starts in April and ends in March. May falls in the first semester, which typically lasts from April through July. The third semester of the previous school year lasted between January and March this year.

The researchers presented the students with three statements that deal with depression and anxiety, including “I feel anxious” and “I feel sad,” and asked them to rate the statements on a scale of one to five based on how they felt.

A score of one stood for “Does not apply at all,” while a score of five meant “Applies strongly.”

The stress scores rose between the third semester and the first semester for boys and girls in their second and third years. The mean score for third-year male students rose from 1.36 to 1.83.

A separate apathy score, based on statements such as “I cannot concentrate on a single subject” and “I am in no mood for studying,” also rose among both boys and girls of both grades.

An earlier study at this same school found stress levels in students tend to rise over the course of a school year. But second-year students’ stress scores during their first semester were clearly higher this school year than the previous one, a phenomenon Kato chalks up to the school closures.

The average stress scores, though they were higher than usual, were still lower than the neutral point of three, which stands for “No opinion.” Kato said that means in general, stress levels, which were quite low from the beginning, rose only slightly.

The researchers turned to other reference statements, such as “Studying is fun in itself,” to determine which students were more affected. They divided the students into two groups based on how motivated they said they were to learn.

The researchers used statements such as “Going to school is fun” to divide the students into two groups based on how well they had adapted to school life.

Both stress scores rose in well-adapted students in their second and third years. But children poorly adapting to school showed a general drop in stress scores, except that the “depression and anxiety” score remained unchanged for third-year students and the apathy score rose for second-year students.