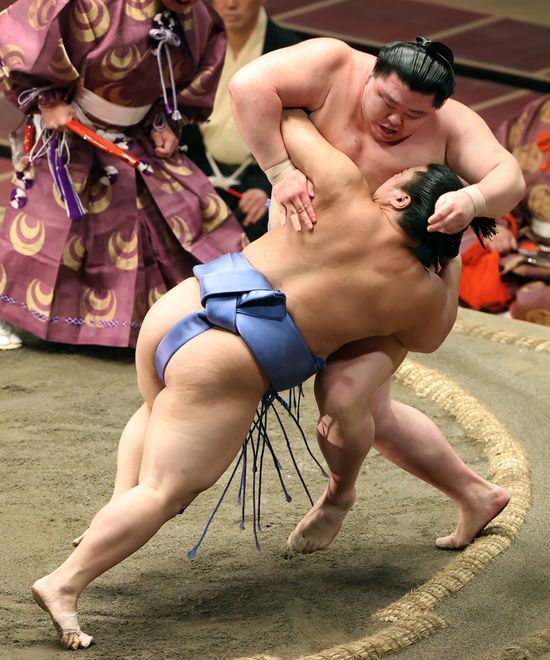 Sekiwake Shodai, back, survives a blast by rank-and-filer Tobizaru at the Autumn Grand Sumo Tournament in Tokyo’s Ryogoku Kokugikan on Sept. 27. (Toshiyuki Hayashi)

The Japan Sumo Association is expected to officially approve his promotion to ozeki on Sept. 30 after a meeting of a board of directors and other discussions.

Officials at the Japan Sumo Association’s department of judging asked JSA Chairman Hakkaku to call an emergency meeting to weigh Shodai’s promotion to ozeki, and their request was accepted.

Shodai entered the final day of the tourney in sole possession of the lead, with ozeki Takakeisho and No. 14 maegashira Tobizaru both one win behind.

But Shodai, 28, muscled out the newcomer to the makuuchi division to secure a 13-2 record and avoid a play-off for the Emperor’s Cup.
Tobizaru finished with a 11-4 record.

“Today was the day I was most nervous in my sumo career because it was my first fight against Tobizaru, but I could react very well,” Shodai said after his victory at Ryogoku Kokugikan.

Shodai is the first wrestler from Kumamoto Prefecture to win a championship since 1909. When he attended the Tokyo University of Agriculture, he was a grand champion of student wrestlers.

He expressed gratitude to his supporters in Kumamoto Prefecture and the university after winning the title.

He will be the first ozeki since Asanoyama was promoted to that rank in the Spring Grand Sumo Tournament this year and the 28th ozeki since the beginning of Heisei Era in 1989.

Shodai will also be the seventh ozeki from Kumamoto Prefectuure and the first since Tochihikari gained the promotion in 1962.

The tournament began without two yokozuna, Hakuho and Kakuryu, who are both nursing injuries.

Many wrestlers also dropped out of the race after suffering injuries, including No. 1 maegashira Terunofuji, who won the previous tournament in July, and komusubi Endo.