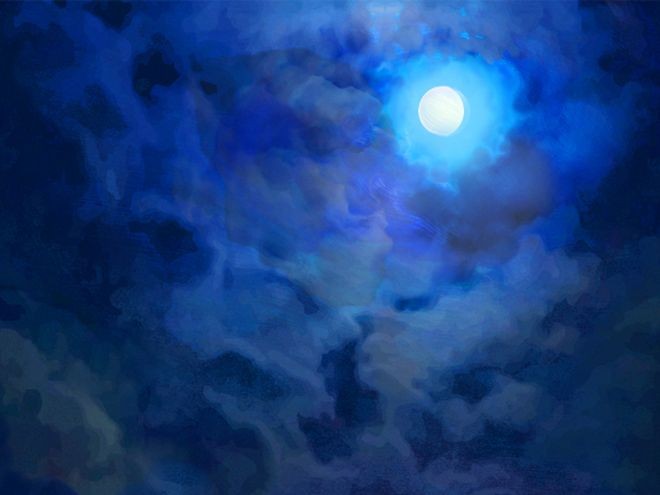 in my dream
the tidally locked moon’s
darker side
--an’ya (Florence, Oregon)

two full moons after
the scent of summer
still on me
--Vandana Parashar (Panchkula, India)

sultry heat--
the dog and I swear
the moon and cats
--Antonella Filippi (Turin, Italy)

self isolation--
moon in the attic window
watching over me
--Arvinder Kaur (Chandigarh, India)

Viewing the moon
on my own
balcony
--Dennis Woolbright (Kita-Kyushu)

The haikuist is a permanent resident and proud homeowner in Japan. When he traveled to Vietnam last spring, however, he had to wait until now for permission to re-enter his adopted country. After getting a negative COVID-19 test result, he said, “Now I am in quarantine in my condominium for 10 more days.”

Angela Giordano wrote this one-line haiku while laying on her back in bed in Avigliano, Italy: in the darkness of the room my soul and I remain naked. She passed a dark night exposed to the truth in life. Watching the milky white moon in the cool of the evening made Satoru Kanematsu think about the “Reclining Nude” painted by Tsuguharu Foujita in 1922.

this evening
you talk about
that moon

lying naked
the cloud of my thought
covers me

Murasaki Sagano wondered what secrets her flowers were trying to hide. Kanematsu gazed at a white cactus flower that rarely blooms and will wilt before dawn. Neev Mistry might have been under quarantine in Sayreville, New Jersey.

In the dark
something concealed
closed gentians

Audience
with Queen of the Night
in moonlight

midnight
our covert rendezvous
among gardenias

before mating
dragonflies go round and round
home quarantine ...

Flight of love
dragonfly tandem
on the breeze

Eleven-year-old Nigel McFadden cheered a flier near the air base in Misawa. Anne-Marie McHarg was mesmerized by a cooling breeze at Queen Mary University of London.

A gentle wind
Catches the shimmering light
Across the lake

Eleonore Nickolay shared an anecdote from her summer job as a maid in a hotel on the southwest coast of France. Samo Kreutz knowingly winked at the wind in Ljubljana, Slovenia. Teiichi Suzuki fathoms the meaning of life.

the morning after
only the rose
knows their secret

Masumi Orihara says she keeps certain secrets to herself, and “when my time comes, I want them to be buried with me.” Melanie Vance went digging in the forest on a moonlit night. Ana Drobot’s friend tried to cheer her up.

moon rocks
glow at the bottom of white birch
truffles

rain clouds...
you offer me one more
truffle

Mario Massimo Zontini mourned for a loved one in Parma, Italy. Murasaki Sagano was cheered by a ring around the moon above Tokyo. Tsanka Shishkova made a virtual wish from Sofia, Bulgaria.

Your wedding ring
I touch it sometimes--
the parting day

summer moon
lit him up
circle of heaven

Luciana Moretto gazed moonward from her office in Treviso, Italy.

a meteorite fragment
on my desk
be elsewhere ... an idyll

look at the kind moon,
round like a crisp healthy bread
promising deep sleep

The next issues of the Asahi Haikuist Network appear Oct. 16 and 30. Readers are invited to send haiku about apples or persimmons on a postcard to David McMurray at the International University of Kagoshima, Sakanoue 8-34-1, Kagoshima, 891-0197, Japan, or by e-mail to mcmurray@fka.att.ne.jp.