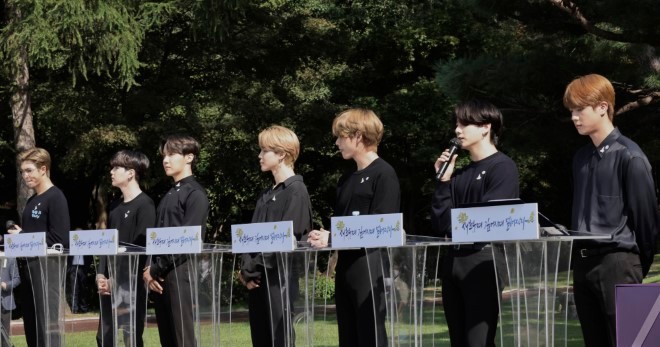 South Korean K-pop group BTS members salute to their national flag during a ceremony marking the National Youth Day at the presidential Blue House in Seoul on Sept. 19. (Yonhap via AP)

Institutional investors had forecast huge demand for the shares, with Big Hit riding on the success of the seven-member band, which has become the first South Korean group to reach No.1 on the U.S. Billboard Hot 100 singles chart with song “Dynamite.”

It will raise 962.6 billion won through the offer of 7.13 million new shares. It is the biggest South Korean IPO since Celltrion HealthCare raised 1 trillion won in 2017.

Based on the pricing, Big Hit’s total market value is expected to be about 4.8 trillion won, taking into account common shares plus redeemable preferred shares that will be converted into common shares upon the IPO.