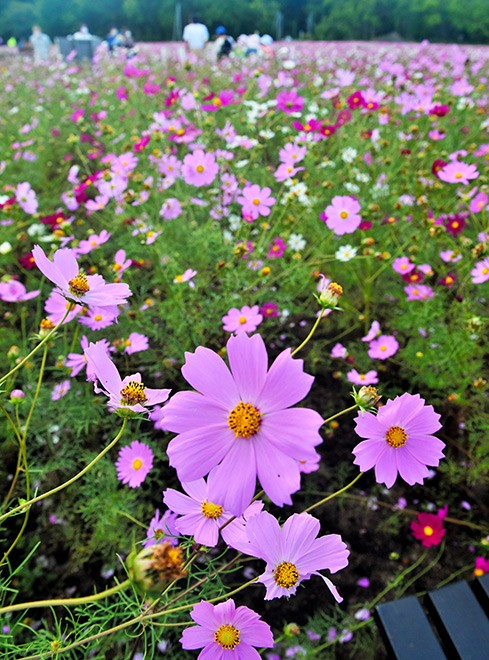 Cosmos flowers in full bloom in Abashiri, Hokkaido, on Sept. 19 (The Asahi Shimbun)

There are various theories about the origin of “aki,” the Japanese word for autumn.

One is that the leaves of trees and grass turn red (“aka”), and this word was eventually turned into aki.

Another is that people become sated (“akitaru”) from plentiful harvests of crops. Yet another is that post-harvest rice paddies become empty (“aki”).

Yesterday, I saw yellowing ears of rice waiting to be harvested.

“The boughs that bear most hang lowest,” goes an old saying.

But the slender, pointed leaves were standing upright, like someone raising their arms to the sky to catch as much sun as they can.

This week, sunny autumn weather is expected to prevail nationwide.

When autumn comes, I always feel that the year is nearing the end.

But my perception changed somewhat when I came across this haiku by Toshi Miyata.

“Autumn is like the blue cover of a newly published book.”

It is indeed possible to sense freshness, rather than maturity, from the blue sky or the air that’s become a little cooler.

I imagine what it would be like if the school year started in autumn.

New students would feel the refreshing fall breeze, not the gentle one of spring. On campus, they would be greeted by cosmos flowers, not cherry blossoms.

The image of autumn as the season of new beginnings is unexpectedly fitting.

Public opinion is divided on starting the school year in autumn, but I think it would be a pity to let the controversy peter out.

The fall start is convenient for Japanese students who want to transfer to overseas schools, and it also makes it easier for Japanese schools to take in students from abroad.

I think this is the sort of advantage that will draw attention again once the COVID-19 pandemic eases.

This poem by Jukichi Yagi (1898-1927) captures the brightness and beauty of autumn.

“When a simple harp is placed in this brightness/ It will start playing quietly/ Unable to bear the beauty of autumn.”

Fall gives light and color that can energize at times.