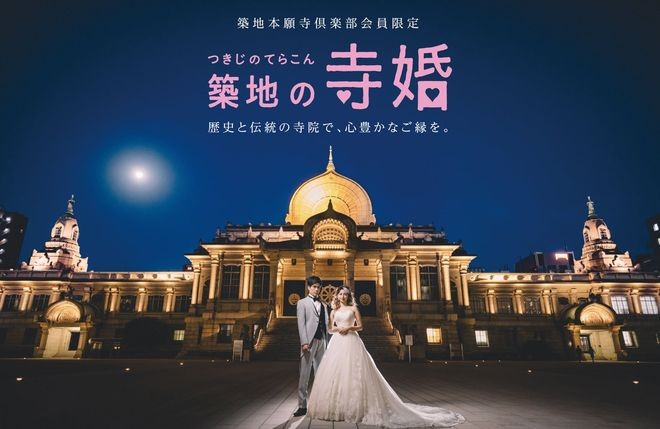 An advertisement for the “Tsukiji no Tera-Kon” matchmaking service. Registrants have to sign up for the Tsukiji Hongwanji Club, which charges no membership fees. (From Tsukiji Hongwanji’s website)

A matchmaking service offered by a more than 4-century-old Buddhist temple in Tokyo’s central Tsukiji district is off to a good start.

“It turned out there was more demand than we had ever expected,” said Reiko Watanobu, a veteran marriage counselor who now works full time for the temple. “Perhaps people feel comfortable turning to us because we are working for a temple.”

Watanobu said she is booked solid on weekends for client interviews and marital talks.

Those who sign up for the Tera-Kon service are interviewed at the temple and registered in a database of the IBJ marriage consulting federation, a national network of matchmaking agencies.

The service had yet to see anyone marry after two months, but it has more than 20 registrants ranging in age from their 20s to 70s.

“I thought I could finally make it here,” said a male corporate board member, who signed up for the Tera-Kon service in September.

The 42-year-old bachelor said he was too shy to sign up at a matchmaking agency and reluctant to use the mechanical systems of matchmaking apps, which are now in high demand.

His indecisiveness ended after he learned about Tsukiji Hongwanji’s matchmaking service.

“I felt reassured that it is operated by a temple that everybody knows,” he said. “I thought this was a good opportunity.”

Tsukiji Hongwanji has set a goal of becoming an “open temple” that young people and families feel comfortable in visiting.

The temple has, for example, established a “common grave,” which charges no management fees, and opened a cafe and a goods shop on its premises in recent years.

“Back in the Edo Period (1603-1867), neighborhood temples played the role of a go-between for unmarried people,” said Yasuko Dokyo, a priest in charge of the Tera-Kon service. “We are hoping to revive that matchmaker role and draw on it as a resource for fostering a sense of intimacy toward temples in today’s young people.”

So far, the Tera-Kon service has mostly been matching its own clients with registrants of other marriage agencies. Temple officials said they hope to further increase the number of Tera-Kon registrants to create more marriage meetings between Tera-Kon’s own clients.

Tsukiji Hongwanji, whose building is characterized by an Indian architectural style, is a much sought-after venue of wedding ceremonies and celebrations.

The officials said they hope that those who get married through Tera-Kon will use other services at the temple.