Suga left with little to work with on Northern Territories issue 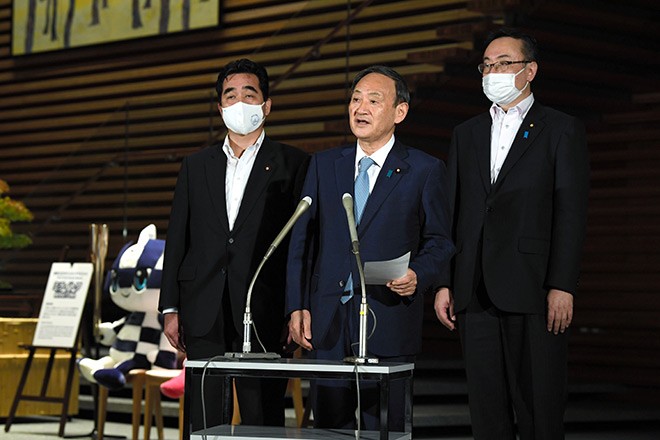 And like his previous calls, Suga's talks with Russian President Vladimir Putin resulted in an agreement to continue bilateral dialogue but nothing more substantial, especially with regard to the thorny Northern Territories issue that has dogged relations for decades.

While Suga has pledged to continue the direction of his predecessor, Shinzo Abe, and conclude a final accounting of diplomatic issues left over in connection with World War II, the situation with Russia is especially touchy and difficult because almost no progress has been made toward concluding a peace treaty despite compromises offered by Abe regarding the disputed Northern Territories.

A peace treaty that would formally mark an end to hostilities stemming from World War II largely hinges on whether any breakthrough can be made on the return of the islands off the eastern coast of the main northern island of Hokkaido that were seized by Soviet forces in the closing stages of the war.

In November 2018, Abe and Putin met and agreed to accelerate negotiations toward a peace treaty by using the 1956 Joint Declaration that said the Habomai islets and Shikotan would be first returned to Japan once the accord is signed.

That marked a major shift in course for Japan which had long insisted on the return of all four islands.

Suga told Putin that he wanted to continue dialogue on a range of bilateral issues, including the signing of a peace treaty.

“I told him I wanted to put an end to the Northern Territories issue and not leave it unresolved for the next generation,” Suga told reporters after the conversation. “The response I received made me confident that I can have a frank exchange of views with President Putin.”

Suga added that Putin also agreed to a face-to-face meeting as early as possible.

Abe had also wanted to put an end to the Northern Territories issue by working closely with Putin. The two leaders met directly on 27 occasions but little in the way of progress emerged on the peace treaty issue.

Talks with Russia were clearly led by officials close to Abe, such as Takaya Imai, a former economy ministry bureaucrat who served as executive secretary under Abe, and Eiichi Hasegawa, a special adviser to Abe.

But with Abe now out of the picture, stalled talks with Russia are unchanged even though the previous agreement reached with Putin about the two-island return remains in place.

“If (the Abe administration) had been really serious about taking back the islands, it would have called for a gigantic amount of economic cooperation measures,” the official said. “It is clear that the approach of the previous administration was a failure.”

Government officials who briefed reporters on the conversation said Suga and Putin reconfirmed that the 1956 Joint Declaration was still the basis for accelerating peace treaty talks.

A high-ranking official in the prime minister’s office said it would not be easy to change diplomatic direction.

Suga no doubt also realizes the difficult path he faces because at his first news conference as prime minister on Sept. 16 he made no direct mention of signing a peace treaty with Russia even as he stated that he aimed to make a final accounting of postwar diplomatic issues.

Russia has also taken a tougher stand toward the Northern Territories. In July, wording was added to the Russian Constitution that banned the ceding of territory to another nation.

On the day Suga called Putin, the Russian military announced the start of military training exercises in the Chishima island chain that includes the Northern Territories. Russian media reported that about 1,500 soldiers, including an artillery unit, took part in the exercise.

(This article was written by Tatsuya Sato and Naoki Kikuchi in Tokyo and Ryosuke Ishibashi in Moscow.)