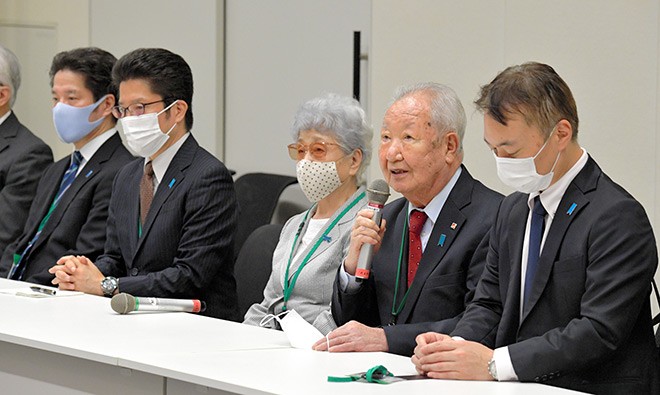 After meeting with Prime Minister Yoshihide Suga, Shigeo Iizuka, second from right, and other family members of abductees hold a news conference in the Diet building on Sept. 29. (Kotaro Ebara)

Yoshihide Suga pledged to do all he can to resolve the longstanding issue of Japanese nationals abducted by North Korea in his first meeting as prime minister with families of some of the victims.

“To return all the abductees to Japan as early as possible, I intend to demonstrate my leadership and break the status quo without missing any chances,” Suga said during the meeting held Sept. 29 in the prime minister's office.

Suga's predecessor, Shinzo Abe, had also vowed to bring closure to the issue of abductions carried out in the 1970s and '80s, calling it his top priority, but he never made major headway during his nearly eight years in office.

Resolving the issue has taken on heightened urgency as the number of surviving family members keeps dwindling.

Kayoko Arimoto, who spent decades fighting to locate her daughter Keiko and bring her safely back to Japan, died in February at the age of 94.

And Shigeru Yokota, who waged a similar high-profile campaign for the return of his daughter Megumi, died in June at the age of 87.

“I feel tormented every day because we have not seen our abducted children for many years,” Sakie Yokota, 84, the mother of Megumi, told Suga. “I pray this problem will finally be resolved so that all of them can land safely on the ground in Japan.”

Shigeo Iizuka, 82, the older brother of abductee Yaeko Taguchi and representative of the Association of the Families of Victims Kidnapped by North Korea, told Suga: “I am suffering from the fact that fewer family members are waiting for their return. Time is running out. Please move forward on this issue specifically.”