Governors call for testing boost ahead of easing entry curbs 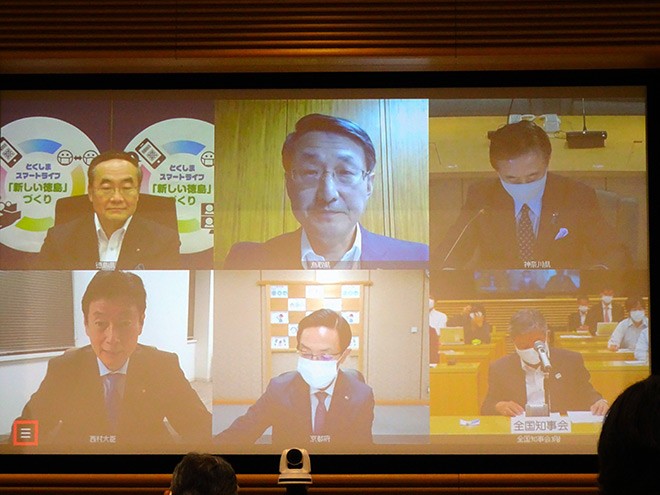 Kamon Iizumi, upper left, the president of the National Governors’ Association, and other members of the association make recommendations to Yasutoshi Nishimura, lower left, the state minister of economic revitalization, during a videoconference. (Asahi Shimbun file photo)

The National Governors’ Association is urging the central government to step up measures against the novel coronavirus at airports ahead of the easing of entry restrictions in October.

It made the request, along with other emergency recommendations, on Sept. 29 during a videoconference with Yasutoshi Nishimura, the state minister of economic revitalization who is also in charge of the government’s response to the COVID-19 pandemic.

The government will partially lift entry restrictions for all nations from Oct. 1.

The association also asked the government to extend the deadline of the “Go To” campaign, which encourages consumer spending to support the travel industry and other sectors hit hard by the pandemic. Travel to and from Tokyo will be included in the “Go To Travel” campaign starting in October.

In addition, it requested the government to ensure polymerase chain reaction (PCR) tests can be done at all domestic airports that operate flights to and from remote islands, along with international airports in the country.

Another request was for the government to take responsibility in securing facilities where foreign tourists to Japan can wait until results of their PCR tests become available, and for those who test positive for the virus to be hospitalized.

The association also made other recommendations to ease the burden the pandemic has placed on public health centers. They include urging inbound travelers through multilingual services upon their arrival in Japan to take infection-prevention measures and disseminating that information similarly through Japanese embassies overseas.

Another similar request was to provide support for telephone interpretation services for medical care.

Tokushima Governor Kamon Iizumi, who is also the president of the association, told reporters after the videoconference that Nishimura had said the government will proceed with anti-virus measures at airports on the assumption that the Tokyo Olympics will be held next summer.

Nishimura said the government will start by doing PCR tests on athletes staying in Japan to take part in international sports competitions, which will resume from November, according to Iizumi.

During the videoconference, the association also asked the government not to end the Go To campaign at the currently scheduled date, but also requested a new system where certain areas can be swiftly excluded from the campaign in the event of a resurgence of infections.

At the beginning of the videoconference, Iizumi called on the government to secure enough supplies of flu vaccines for all elderly people and health care workers in the country, citing concerns about a possible simultaneous outbreak of a seasonal flu alongside the novel coronavirus infections.