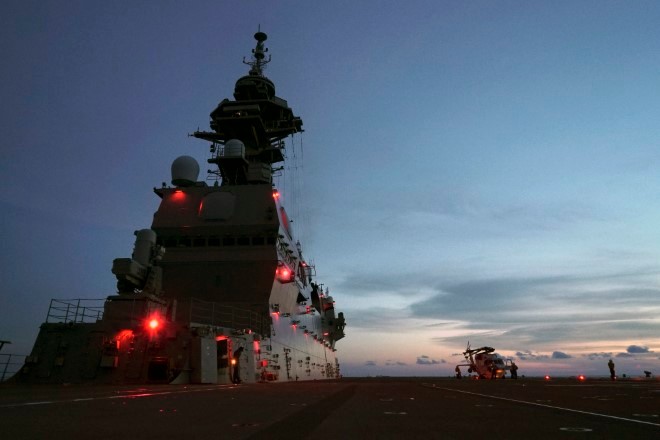 In this June 26, 2019, file photo, aircraft maintenance engineers prepare to stow away an SH-60K helicopter on the flight deck aboard the Maritime Self-Defense Force helicopter carrier JS Izumo (DDH-183) along a sea route heading northward from Brunei towards Sulu Sea. (AP Photo)

Japan’s Defense Ministry is seeking a record-high budget of nearly 5.5 trillion yen ($55 billion) for fiscal 2021 to fund more purchases of costly American stealth fighters and expand its capability to counter possible threats in both cyber and outer space.

The budget request made public Wednesday is the first under new Prime Minister Yoshihide Suga and would be an 8 percent increase from the current year, signaling a continuation of his hawkish predecessor Shinzo Abe’s security policy. Japan’s defense spending has risen for eight consecutive years since 2013, a year after Abe took office.

The rise in spending came as Abe pushed for Japan’s Self-Defense Force to expand its international role and capability amid threats from North Korea and China, both traditional and nontraditional. Japan also faced demands from President Donald Trump that U.S. allies increase defense spending, which Japan did in part with costly American weapons purchases that also bolster weapons compatibility with American forces.

Purchases for missile deterrence are among the most costly items in the proposed 2021 budget and include Lockheed Martin Corp.’s F-35B stealth fighters capable of short takeoff and vertical landing for 26 billion yen. Japan has plans to acquire 42 F-35Bs in coming years.

To accommodate the F-35Bs, the Defense Ministry is seeking 3.2 billion yen to reconfigure one of its two helicopter carriers, Kaga, with a heat-resistant flight deck. The other flat-top Izumo has also been configured.

The ministry is also seeking 58.7 billion yen for the research into developing next generation fighter jets to replace F-2s retiring in the 2030s. Japan plans to develop its own engine, but is also considering co-developing some other parts with the U.S. and Britain.

Japan’s costly purchase of American weapons has helped reduce its trade surplus with the U.S. but has raised concerns at home that it will set back its fledgling local defense industry.

The 2021 budget request includes funding for less traditional defense such as the research and operation of space and cyber units, as well as for new electromagnetic warfare units.

The electromagnetic unit would be headquartered at the Ground Self-Defense Force’s Asaka base, north of Tokyo, and an unspecified number of staff would be deployed at several army bases across the country by March 2022, mostly in southern Japanese islands including Okinawa--areas of increased Chinese maritime and air activity.

Japan in May launched the Space Operations Squadron as part of the Air Self-Defense Force, with 20 initial members. It is expected to grow to about 100 members once the unit is fully operational in 2023.

The unit is tasked with monitoring and protecting Japanese satellites from enemy attacks or space debris. It will also conduct satellite-based navigation and communications for other troops in the field.

The ministry will launch a commanding unit in western Tokyo and staff size will be increased to 70 next year. It is seeking more than 72 billion yen to design and launch a surveillance satellite and develop and purchase equipment compatible with the U.S.

The requested budget could rise even higher as the ministry has requested an unspecified amount for the alternative to the land-based Aegis Ashore missile defense system, which the government scrapped in June because of technical issues.

Defense officials are considering three offshore options, including the use of destroyers, with a decision to be made later in the year.

Following the Aegis Ashore cancellation, Abe instructed the government to study a major change to its missile deterrence policy and seek the possibility of developing a first-strike capability on enemy bases to defend against imminent attacks amid rising missile threats in the region.

Suga’s government is expected to compile a new plan later this year.

Abe in 2015 reinterpreted Japan’s pacifist constitution to allow the use of force in depending itself and its allies. Japan’s defense spending now ranks among the world’s top 10, according to Stockholm International Peace Research Institute.