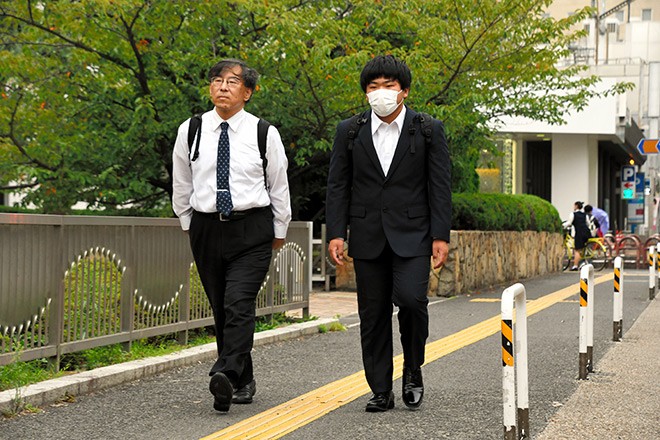 A high school student and plaintiff Wataru, right, heads for Takamatsu District Court to file a lawsuit in Takamatsu on Sept. 30. (Shomei Nagatsuma)

TAKAMATSU--A high school student has embarked on a legal quest to overturn a video game bylaw set by the prefectural assembly that limits their playing to one hour a day on weekdays for children under 18.

The teenager and his mother filed the lawsuit with the Takamatsu District Court on Sept. 30 seeking damages of 1.6 million yen ($15,162) from Kagawa Prefecture.

The legal claim argues that the Kagawa prefectural assembly’s new rules on video gaming violate a person’s freedom to decide how long they want to play. The bylaw places a limit on how long kids can play games in a bid to curb online video game addiction.

The plaintiffs, Wataru who asked to be identified by his first name, a third-year high school student, and his mother, 43, both live in Takamatsu.

“The prefectural assembly created the ordinance as if to say that games are bad, but they are not that bad,” Wataru, 17, said at a news conference held after filing the papers. “The ordinance excessively intervenes into the privacy of families.”

“We should decide how long we play games by ourselves,” he added.
They raised funds for their legal expenses via crowdfunding and collected about 6 million yen from more than 1,800 people.

Wataru’s legal filing claims that restricting kids to 60 minutes a day of game play on weekdays with some other limitations violates the right to pursue happiness guaranteed by Article 13 of the Constitution.

It said public comments from the prefectural assembly’s public consultation on the matter, which is part of the enactment process, resulted in many opinions that stood out as unusual, conspicuously sharing similar wording and phrases--even the same typos.

“There are no democratic grounds” for the law, the suit argues.

Assembly members proposed the new rules in an ordinance that passed through the assembly in March and was brought into effect in April.

The Asahi Shimbun obtained the original public comments through requests for information disclosure.

An analysis of the comments found many unnaturally worded supporting opinions, with some sharing similar words and phrasing. There was also evidence to suggest that many public comments may have been sent from the same few specific computers.