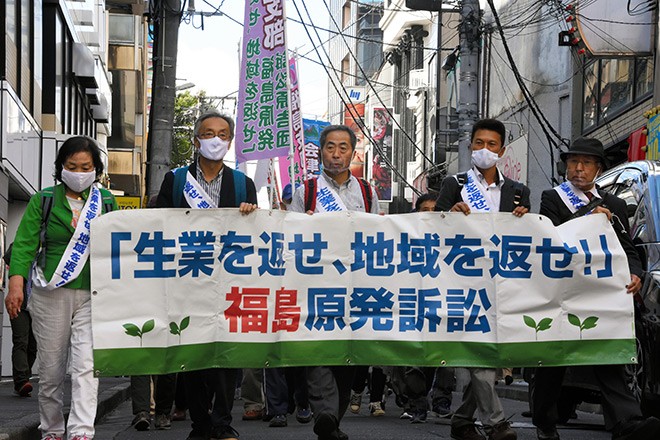 Plaintiffs and supporters march in central Sendai ahead of a ruling by the Sendai High Court on Sept. 30. (The Asahi Shimbun)

A recent high court ruling was a harsh indictment of the plant operator and the central government for allowing unprecedented damage from the 2011 Fukushima nuclear disaster by ignoring warnings and failing to take action.

In a damages suit filed by some 3,700 plaintiffs, including residents of Fukushima Prefecture and evacuees, the Sendai High Court found both Tokyo Electric Power Co. and the government liable for the damage caused by the accident at the Fukushima No. 1 nuclear power plant.

The decision was significant because it was the first high court ruling in a series of lawsuits around the nation seeking compensation from both TEPCO and the government for the triple meltdown triggered by the March 2011 earthquake and tsunami.

During the nine and a half years since the accident, some 90 of the plaintiffs in this case have died. The government and the utility should delay no further in providing relief without fail to all people who have suffered from the calamity.

The trial focused on two questions. One was whether it was possible to predict the possibility of such a huge tsunami swamping the plant. The other was whether the accident could have possibly been averted.

The high court acknowledged the credibility of a long-term assessment of the probability of major earthquakes released by the government’s Headquarters for Earthquake Research Promotion in 2002. The report warned that a huge earthquake could occur off Fukushima Prefecture.

The court decided that the accident could have been prevented if TEPCO and the government had taken proper action.

The ruling was a sharp rebuke to the utility and the government.

With regard to the long-term evaluation of the chances of a gigantic earthquake occurring off Fukushima, for instance, TEPCO sought the opinion from only one scholar critical of the assessment and then told the now defunct Nuclear and Industrial Safety Agency that the assessment was unreliable.

The high court denounced the agency, which was responsible for the safety of nuclear power plants, for readily accepting the utility’s insincere verdict on the risk assessment and failing to perform the role the regulatory agency was supposed to perform.

The ruling effectively asserted that both TEPCO and the government were responsible for the accident since they placed greater importance on the company’s bottom line than on the safety of the plant out of fears about the financial burden of taking safety measures against possible tsunami.

The court took into account the fact that the government had been promoting nuclear power generation under its energy policy and continued permitting the utility to operate the plant.

It is a well-reasoned, fair-minded ruling.

The fact that the administration’s inaction was so clearly censured by the judiciary should be taken seriously.

All the people involved, whatever their positions may be, should take a fresh, hard look at what was behind the Fukushima nuclear disaster.

The administration, which is still intent on restarting off-line reactors, and power companies that are procrastinating on efforts to safeguard their nuclear facilities from possible volcanic eruptions and terrorist attacks for economic reasons should read the ruling carefully and take to heart its important message.

Another significant element of the ruling expanded the range of plaintiffs who could receive compensation and increased the total amount of compensation as it recognized the seriousness of the suffering of victims who have lost their homes. The court ordered the defendants to pay a total of more than 1 billion yen ($9.47 million) to the plaintiffs.

The increased amount means that compensation that has so far been paid to victims according to guidelines set by the government’s Dispute Reconciliation Committee for Nuclear Damage Compensation is insufficient.

Similar views about compensation to people who have been damaged by the Fukushima disaster have been expressed in other court rulings in similar damages suits.

In its editorials, The Asahi Shimbun has called for a review of the compensation guidelines, which were established soon after the nuclear accident, arguing that they do not reflect the magnitude of the actual damage.

The government should also tackle this issue immediately.