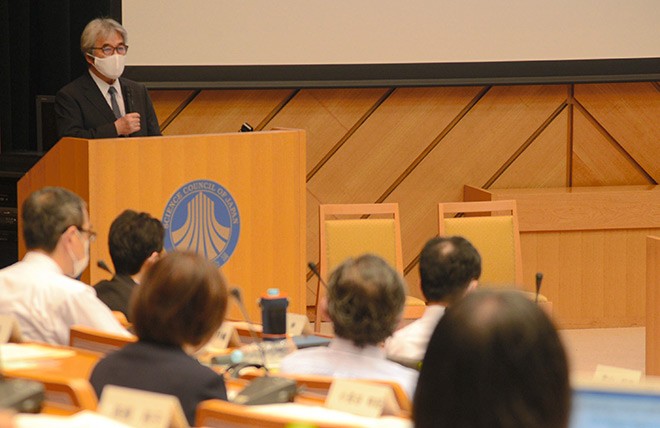 Juichi Yamagiwa, the outgoing president of the Science Council of Japan, speaks at a council meeting on Oct. 1. (Yu Kamata)

Prime Minister Yoshihide Suga has angered top academics in the nation by refusing to appoint six scholars who had criticized the security policies of his predecessor to the Science Council of Japan.

The government has not given a reason for the exclusion of the six from the council, which presents proposals and declarations regarding some of the most important topics of the day, including global warming and reproductive medicine.

But academics are demanding answers, citing concerns about a possible threat to academic freedom guaranteed under the Constitution.

The Science Council at an Oct. 2 meeting decided to ask Suga to explain why the six were not appointed and to allow them to join.

The council is funded by the central government, but it is considered an independent organization and has been described as the national assembly of scholars.

“Six individuals were not appointed as new members,” Juichi Yamagiwa, the council’s outgoing president, said at the Oct. 1 meeting of the Science Council. “I am very surprised because this is the first time this has happened. I sent Prime Minister Suga a document asking for an explanation, but I received no response.”

The council has 210 members, half of whom are appointed every three years to six-year terms. The council submits a list of recommended members, and every prime minister--until Suga-- has appointed all those on the list.

The six scholars left off this year’s list have in various ways voiced opposition to important legislation presented by the administration led by Shinzo Abe, such as the state secrets protection law and national security legislation that paved the way for a limited exercise of the right to collective self-defense.

One of those not appointed was Yoko Kato, a history professor at the University of Tokyo.

“It is problematic that the prime minister’s office is not taking seriously academic freedom and the duty of the Science Council,” she said in a statement.

The other five not appointed are all scholars in the humanities or social sciences.

According to Yamagiwa and other Science Council officials, the council submitted a list of 105 scholars to Abe on Aug. 31, a few days after he announced he was stepping down as prime minister due to health reasons.

On Sept. 28, the central government presented a list of the newly appointed members, but it contained only 99 names.

When inquiries were made with the government, one official said, “This is not a clerical mistake, but I cannot give the reason why they were not appointed.”

Yamagiwa said he submitted his document to Suga on Sept. 30.

After the Oct. 1 assembly, Yamagiwa told reporters: “This is an extremely important issue for academia. I simply cannot accept that no reason was given for not appointing the six individuals.”

He pointed out that when the council submitted its recommendations, it included its reasons for doing so for each individual on the list.

Asked about the refusal to appoint the six, Chief Cabinet Secretary Katsunobu Kato said at his Oct. 1 news conference: “It is possible from a legal standpoint to exercise a certain level of oversight through selecting the members. But that does not directly lead to a violation of academic freedom.

Takaaki Kajita, the 2015 co-recipient of the Nobel Prize in Physics who is the new Science Council president, indicated that he would also seek an explanation from Suga about why the six were not appointed.

“There is a need to handle this matter in a serious way because it is an extremely important issue,” Kajita said.

Three of those not appointed--Ryuichi Ozawa, a professor of constitutional law at Jikei University in Tokyo, Masanori Okada, an administrative law professor at Waseda University also in Tokyo, and Takaaki Matsumiya, a criminal law professor at Kyoto’s Ritsumeikan University--submitted a request to Kajita on Oct. 1 asking that the Science Council as a whole work toward having the appointment rejections withdrawn.

“If the refusal to appoint was based on an assessment of our research activities, that is a gross violation of academic freedom guaranteed by Article 23 of the Constitution,” the request said.

It went on to state that allowing the prime minister to make personnel decisions “would reject the standing, independence and authority of the Science Council.”

Okada told reporters that in 2015 he appeared at a Diet hearing on the national security legislation and stated that it was a violation of the Constitution.

“If the refusal to appoint was linked in some way to academic views I expressed in the Diet, that would be a violation of my academic freedom,” Okada said.

Opposition lawmakers on Oct. 2 held a hearing with the three who submitted the request to Kajita.

Okada told the lawmakers: “If constructive proposals are not made, (the government) will only listen to proposals and legislative interpretations that say ‘yes’ to what the Cabinet does. I believe that would be like turning a blind eye to future trouble.”

Shigeki Uno, a professor of the history of political thought at the University of Tokyo who was also left off the council, announced in December 2013 along with other scholars opposition to the state secrets law.

Kato and Matsumiya both opposed the anti-conspiracy bill that made planning a crime with others illegal.

The sixth scholar not appointed was Sadamichi Ashina, a religious studies professor at Kyoto University.

Seigo Hirowatari, professor emeritus of the sociology of law at the University of Tokyo who once served as Science Council president, said having a prime minister not follow through on the council’s recommendations bends the spirit of the law related to the council.

“The major problem is that those rejected were limited to those in the humanities and social sciences,” Hirowatari said. “Academic fields whose very existence depends on a critical analysis of contemporary society were targeted. I can only surmise that the government was seeking to weaken the council because it likely felt intimidation would frighten scholars.”