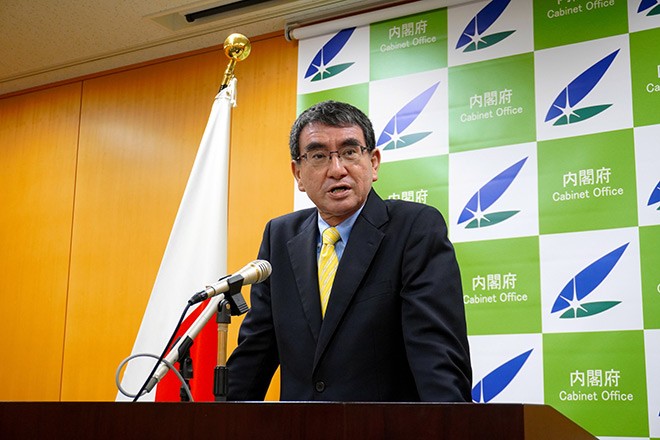 Japan’s state minister in charge of administrative reform says government agencies will drop requirements for an official stamp from hundreds of document submission procedures in a sweeping effort to reduce red tape.

Taro Kono announced on Oct. 2 that the “hanko” stamp seal requirement will be removed from much of the country’s administrative procedures, following the results of a recent survey by his office across all government agencies that asked whether they could abolish the mandate.

Among 820 types of procedure that require private businesses and organizations to submit documents stamped with an official seal to government agencies, a whopping 96 percent, or 785 types of procedures, will drop the requirement, Kono said.

Hanko stamps are used widely across the country to officially sign a document in addition to using a signature. It is in many instances a legal requirement and is a cultural tradition that dates back hundreds of years. But the requirement for hanko approval also amasses physical paperwork and has been singled out as an obstacle to digital procedures and teleworking.

The government had collected the survey answers by the end of September and then analyzed them.

For the 785 types of procedures that have been singled out, officials answered either that “they have decided to abolish the use of the hanko,” or “they intend to do so.” For the remaining 35 procedures, officials answered that they “want to keep” the hanko requirement, partly because it is legally prescribed.

But Kono said hanko approval is not necessary even in some of those 35 procedures.

“It seems some of them do not need (the hanko seal),” he said.

Kono said he will closely examine these cases and hopes to pass a package of bills to remove the traditional requirement.

He said while the hanko seal is required by law in some procedures, the law can be changed.

“It should not be the reason,” he said. “All that’s required is that we change the law. It is conceivable to do it by an omnibus bill.”

He did not give a timeline for when the legislation would be introduced in the Diet.

The emperor uses a special stamp called “gyoji” on letters of credence for ambassadors and ministers, as well as on the issuance of laws, ordinances and treaties.

Those procedures are considered as acts by the state, as prescribed by the Constitution, Kono said. Therefore, he has not included them in the list for abolishment.

Kono said he is asking each government agency to determine if they can stop using the hanko seal for procedures within and between agencies in instances where it is done simply because it is prescribed by law, and report back to him by Oct. 9.