Turkish man gets apology over broken arm while in custody 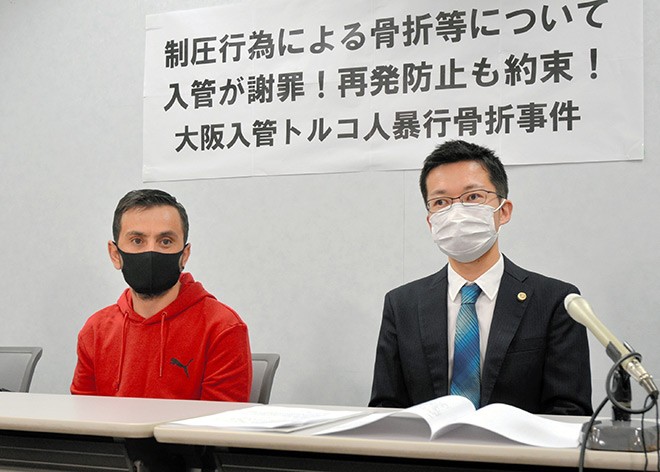 Murat Orhan, left, and Masahito Nakai, one of his lawyers, hold a news conference in Osaka’s Kita Ward on Oct. 1 after a settlement was reached in a lawsuit over excessive force used by officers at the local immigration center that resulted in a broken arm. (Yuto Yoneda)

OSAKA--A Turkish man won an apology and a settlement from the immigration bureau here after he sued the state over an incident at the bureau's immigration center that resulted in officers breaking his right arm.

It is rare for an apology from an immigration bureau to be included in a settlement clause, according to the plaintiff's lawyers.

Under the 3-million-yen settlement reached Sept. 29, the immigration bureau pledged to take the incident seriously and apologized. The bureau also vowed to ensure that the rights of detainees are fully respected in future.

Orhan arrived in Japan in 2015 but was denied entry because he had been previously deported for overstaying his visa.

He had since been held at the Osaka Regional Immigration Bureau detention facility.

In July 2017, Orhan was taken to an observation cell after hurling a book at a wall in the facility. His right arm was broken when officers twisted it to handcuff him, according to his complaint.

Video footage taken inside the observation cell shows seven or eight officers forcing him face-down on the floor, holding him by his head and torso.

The lawyers believe that the existence of the footage capturing the entire scene was one of the key factors that led to the settlement, including the rare apology.

Many similar lawsuits have been filed by foreign nationals, alleging human rights violations while they were held at immigration facilities.

A Kurdish man filed a suit at the Tokyo District Court in November 2019 after being denied medical treatment at a hospital outside the Higashi-Nihon Immigration Center in Ushiku, Ibaraki Prefecture, where he was being detained.

A Japanese-Peruvian man who has been held at the Osaka Regional Immigration Bureau also filed a lawsuit at the Osaka District Court in February, alleging that immigration officers injured him when they restrained him.

“It’s a groundbreaking settlement containing a clause that states an immigration bureau admits it was at fault and has apologized,” said Hiroshi Komai, a professor of international sociology at the University of Tsukuba who is well-versed in immigration issues.

“I have to say immigration facilities in Japan lack an awareness of human rights, compared with other countries,” he said. “Japan needs a system to allow third-parties to check what goes on in the closed facilities.”

The Osaka Regional Immigration Bureau called the incident involving Orhan regrettable and vowed to ensure that detainees are treated properly in the future.

“I became happy when I saw the word ‘apology’ (in the settlement clause),” Orhan said in Japanese at an Oct. 1 news conference where he was accompanied by his lawyers.

He was granted temporary release from the immigration facility and now lives with his wife after getting married last December.

But he said he still does not have full control over his right arm. The immigration bureau deprived him of that function for the rest of his life, Orhan said during the trial.

Orhan is in the process of applying for a special permit to remain in Japan.

“I’m not Japanese, but we are fellow human beings,” he said. “Please be nice to foreigners.”