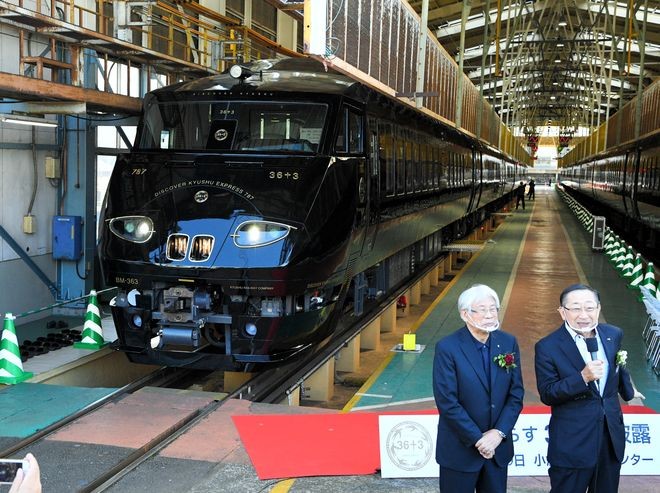 KITA-KYUSHU, Fukuoka Prefecture--Kyushu Railway Co. (JR Kyushu) will begin running its new "36+3" luxury sightseeing train on Oct. 16, which will take passengers across all seven prefectures in the Kyushu region.

The railway unveiled its latest tourist train at its factory in Kokura-Kita Ward on Sept. 29.

"We'd like to promote Kyushu at home and abroad, using the 36+3 as a springboard," said JR Kyushu President Toshihiko Aoyagi.

The exterior of the 36+3 train is finished in metallic black and features a gold-colored logo.

The floors of cars No. 1 and No. 6 are covered with tatami straw mats, marking the first time a JR Kyushu tourist train has been outfitted with the traditional flooring. It is also furnished with sofas and other furniture under a design theme that unites elements of Japanese and Western styles.

The shoji screen doors and the ceilings are decorated with a type of intricate wood latticework, called “Okawa kumiko,” a traditional, local craftwork from Okawa, Fukuoka Prefecture. It was also used to garnish the Nanatsuboshi.

The six-car train has a capacity of 105 passengers and boasts 13 private compartments that can host from one to six people each. Car No. 3 serves as a dining car, while No. 4 has a shared space for events.

The 36+3 was remodeled from a 787-series limited express train called the Tsubame, which runs between Hakata and Nishi-Kagoshima stations. Mitooka designed the Tsubame about 30 years ago.

The name 36+3 refers to the fact that Kyushu is the world's 36th-largest island. The numeral 3 represents customers, local residents and the railway company, reflecting JR Kyushu's wish that the three become one.

The sightseeing train will run along five routes that form a circuit, alternating daily, that each showcase different regions in Kyushu.

But the route connecting the Hakata and Kagoshima-Chuo stations, which includes the section managed by Hisatsu Orange Railway Inc., will be suspended for the time being due to the damage caused in part of the section by the torrential rains that hit the region in July.