Gifu fossils may provide clues to evolution of seals, walruses

Fossils of the lower jaw and skull of a pinniped were found from strata dating back 18 million years in Mizunami, Gifu Prefecture. (Noboru Tomura) 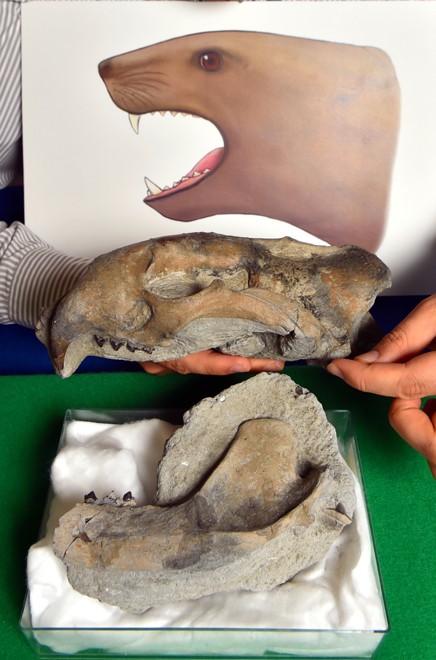 A Mizunami Fossil Museum official shows fossils of the lower jaw, front, and skull of a pinniped at an Oct. 2 news conference. An artist's rendition of an Enaliarctos is shown in the background. (Noboru Tomura)

MIZUNAMI, Gifu Prefecture--Fossils uncovered here are thought to offer a key to resolving how seals and walruses went their separate ways in evolution.

A lower jaw fossil of a pinniped was found in strata dating back 18 million years as work got under way for a road improvement project.

Subsequent excavations unearthed other remains from what is presumed to be the same animal.

Officials of the Mizunami Fossil Museum, announcing the finding Oct. 2, said it is very rare for fossilized parts from a single animal’s head and body to be found in close proximity from strata as old as 18 million years.

The remains were found in a soil layer dating from the Miocene epoch of the Neogene period of the Cenozoic era.

A full-scale excavation began after the lower jaw fossil was discovered on Sept. 3.

Naoki Kohno, who heads a group at the National Museum of Nature and Science researching evolutionary history and is also a professor of mammal paleontology at the University of Tsukuba, was asked to evaluate the fossil.

He determined it was from an animal close to the Enaliarctos, an extinct genus of pinniped.

At an Oct. 2 news conference, four fossils were displayed, including the lower jaw, which still had teeth, and skull.

Officials at the Mizunami Fossil Museum said the fossils indicate the animal was about two meters long. The lower jaw fossil is in good condition, which might help researchers determine the gender of the animal and the actual species.

On the other hand, it could represent a new genus and species, they said.

In response to questions from The Asahi Shimbun, Kohno labeled the discovery as outstanding.

“The fossils were preserved in extremely good condition. Not only that, other fossil remains were found after an extensive excavation of the site following the initial discovery,” Kohno said.

He said the findings may well play a very important role in understanding the evolutionary process.

Noting that the fossils were the first found in Japan of a pinniped from that geological era, Kohno was excited at the prospect that the remains came from a single animal.

Having an idea of the entire skeletal structure of the creature would prove very helpful in understanding how it moved on land as well as how it swam, he added.

Kohno said the fossils will be enormously helpful in gaining a clearer understanding of the evolutionary process of pinnipeds in the early stages when the clade separated into seals and walruses.