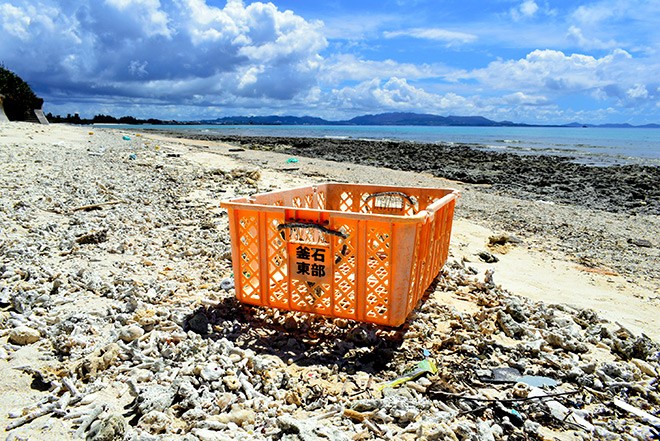 A plastic container from Kamaishi, Iwate Prefecture, found on a beach on Iejima island in Okinawa Prefecture (Provided by Yukito Kinjo)

Plastic containers washed out to sea after the 2011 earthquake and tsunami disaster are starting to wash up on the shores of Okinawa Prefecture, leaving residents puzzled at the time it took for the items to travel just 2,000 kilometers.

Yasuhiro Nomura, 47, operator of an Italian restaurant on Ishigakijima island, was walking along a beach Sept. 9 when he came across an aquamarine container measuring 1 meter on each side with lettering for 2005 and the Miyako fisheries cooperative in Iwate Prefecture.

“At first, I thought it came from (Okinawa's) Miyakojima island, but then I recalled news reports about items from the Great East Japan Earthquake washing ashore,” Nomura said.

When contacted by The Asahi Shimbun, an official with the Miyako fisheries cooperative said the container was one of theirs.

On Iejima island about 450 kilometers northeast of Ishigakijima, another plastic container was discovered Sept. 11 on a beach. That container also was from Kamaishi.

Kiyoshi Tanaka, an associate professor at the International Coastal Research Center, based in Otsuchi, Iwate Prefecture, which is part of the Atmosphere and Ocean Research Institute of the University of Tokyo, offered his take on how the items wound up so far south.

He said that for floating objects from off the Sanriku coast in the Tohoku region to ride ocean currents and reach Okinawa, they would have to move out into the Pacific and travel in a roundabout manner in a clockwise direction.

That suggests a great deal of time was required before any objects washed ashore in Okinawa, he said.

But Tanaka had no idea why there should suddenly be a flood of such findings. He speculated that a typhoon or changes in the currents around Okinawa may have contributed to the serial washing ashore of the disaster debris.

The Ie village board of education has decided to display the items found washed ashore on the island as a way to teach about natural disasters.

(This article was written by Masakazu Higashino, a senior staff writer, and Kazuhiro Fujitani.)