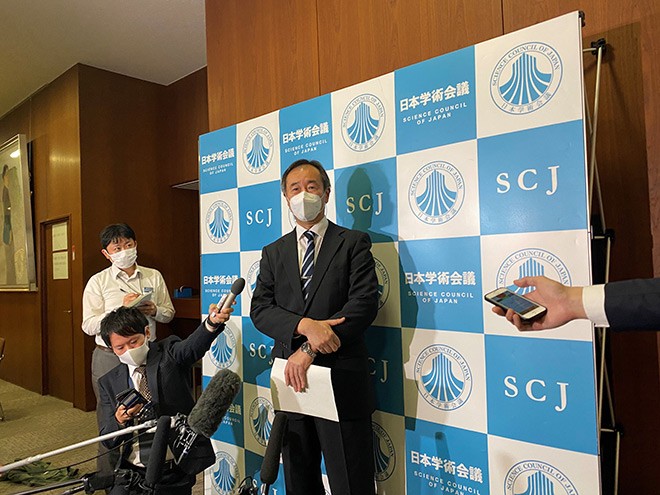 With tempers nearing a boiling point, the Science Council of Japan wants an explanation from the government as to why it snubbed six academics recommended for the council.

The council's executive committee on Oct. 3 agreed to submit a letter to Prime Minister Yoshihide Suga pressing for their appointments as well as hearing the justification for their exclusion.

The council will first send an email to the Cabinet Office, which oversees the council, and release the contents on its website.

It is not clear whether Takaaki Kajita, the 2015 co-recipient of the Nobel Prize in Physics who became the Science Council’s president on Oct. 1, will personally hand the letter to Suga.

At the executive meeting, members reported that many in academia and elsewhere have expressed support for the Science Council’s move to push for the appointments and receive an explanation.

They also said various academic societies contacted the council to voice their outrage over the government’s handling of the matter.

“We want to work closely with those societies,” said Kajita, director of the University of Tokyo’s Institute for Cosmic Ray Research.

Working groups will be set up to liaison with various groups of researchers, he added.

Suga angered the Science Council on Oct. 1 when he refused to appoint the six scholars. They were on a list of 105 new members recommended by the council, but Suga refused to consider their appointments, making him the first prime minister to officially reject the council's wishes.

The six are academics who voiced criticism of the security policies of Prime Minister Shinzo Abe, Suga’s predecessor.

Suga and Chief Cabinet Secretary Katsunobu Kato would not elaborate on the reason for refusing to name the academics despite questioning by reporters.

On Oct. 3, an estimated 300 protesters, donning masks and maintaining safe social distancing, assembled before the prime minister’s office building in Tokyo, denouncing the government’s handling as “act of infringing on academic freedom.”

Rather than chanting slogans, they held up placards, including those that read, “We protest the government’s intervention into appointment” and “Protect academic freedom.”

Among the speakers who took the microphone at the rally was Masanaori Okada, an administrative law professor at Waseda University, one of the six rejected scholars.

“The Science Council is an independent entity, and the government has no oversight authority,” he said. “It is totally unacceptable that the prime minister can freely appoint council members.”

Koki Saito, 22, a Toyo University student, said he joined the demonstration out of a “sense of alarm” as the government’s approach is worrisome and it affects him and other students of the next generation.

Takaharu Kohara, professor of local autonomy at Waseda University who called for the rally, said the future of learning is at stake.
“We, academics, are the ones who need to aggressively raise a voice (in protest),” he said.

The Science Council is the representative organization of Japanese scientists of all fields from humanities to engineering to life sciences. The council is funded by the government, but is considered an independent organization.

(This article was compiled from reports by Tetsuya Ishikura and Ryo Oyama.)